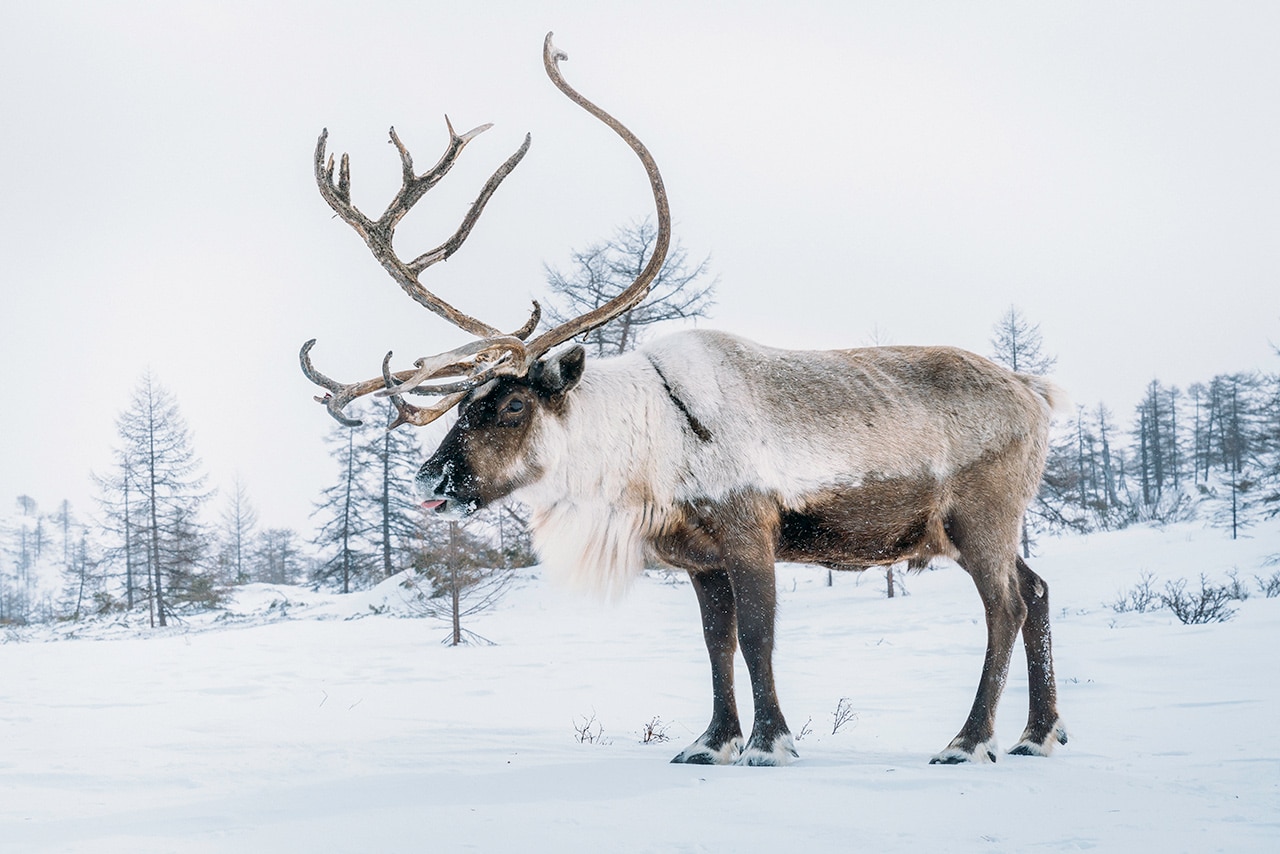 On the remote Russian peninsula of Kamchatka, indigenous Even people watch over large herds of reindeer as their ancestors have for centuries. We caught up with them after traveling by snowmobile.

Riding snowmobiles through a whiteout in 60 mph winds, with a wind chill temperature of -39F, we were attempting to escape the top of a featureless alpine plateau. The weather just keeps getting worse.

It’s March, and we’re deep in the heart of Kamchatka, a 900-mile long Russian peninsula attached to Siberia that juts out into the Pacific Ocean. Most people only know it from the game of RISK.

This mysterious landmass was off-limits to outsiders until the 1990s, due to its strategic importance to the Soviet military’s nuclear submarine bases. 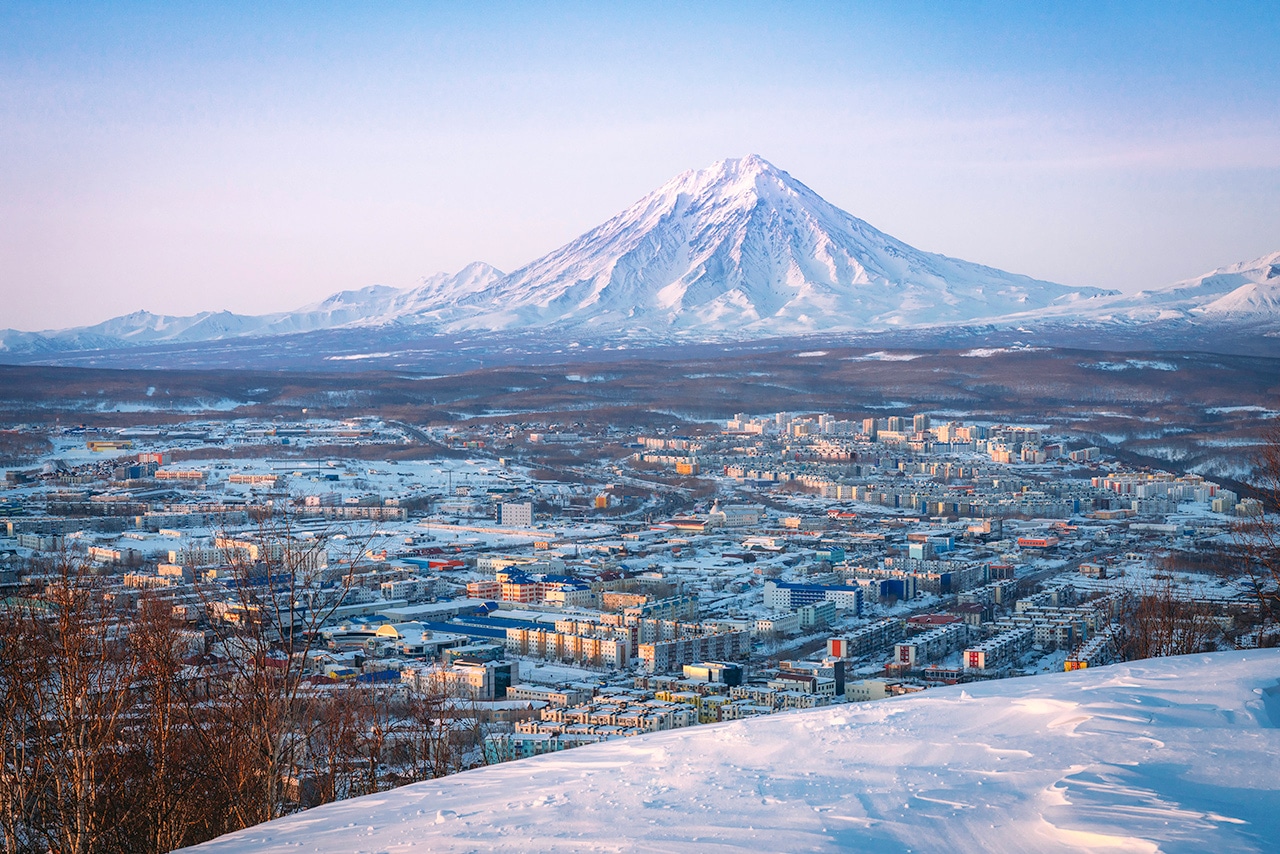 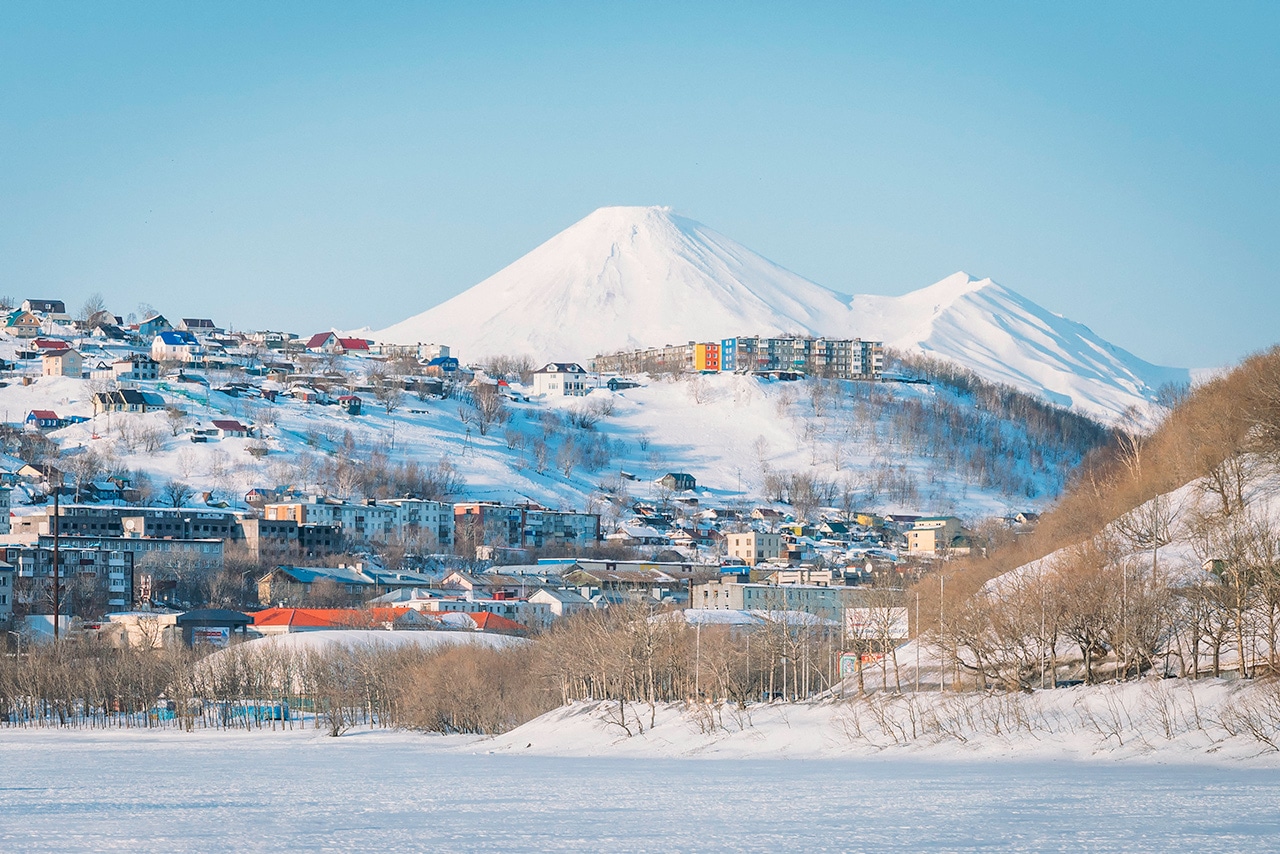 A City Surrounded by Volcanos

No roads lead into Kamchatka, the only way to visit is by sea or air. The peninsula was once part of the Bering land bridge that connected Asia to North America.

Part of the Pacific Ocean’s notorious Ring Of Fire, Kamchatka boasts 200 different volcanoes, 30 of them active. It’s also teeming with wildlife, including a massive population of Grizzly bears.

Our mission? Take a group of adventure-lovers into the heart of this lesser-known wilderness to meet with nomadic Even reindeer herders who live there. 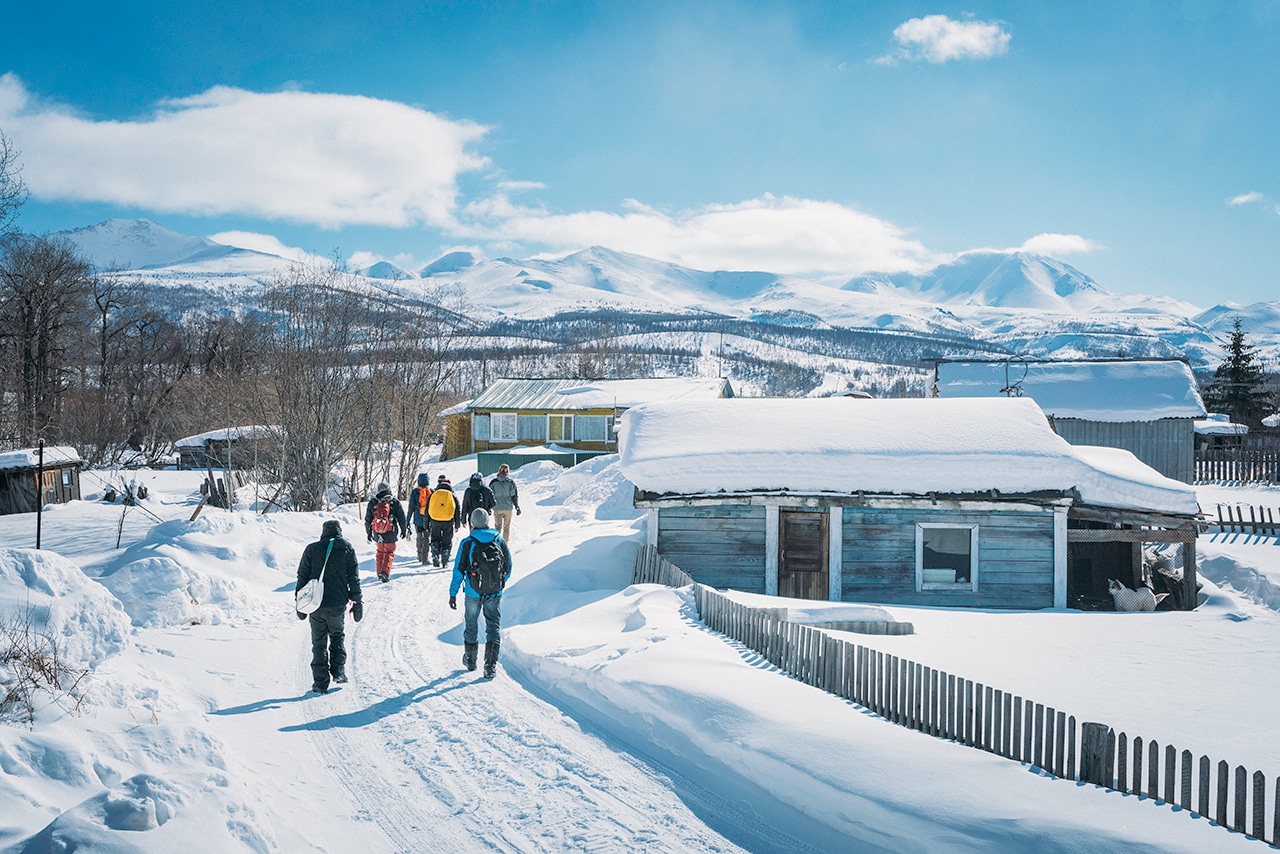 The Small Village of Esso

Preparing For Our Expedition

We first flew into Petropavlovsk-Kamchatskiy, Kamchatka’s small Soviet-style capital city surrounded by volcanoes. Followed by a 6-hour bus ride to the small village of Esso, our jumping off point for the rest of the trip.

In Esso we secured snowmobiles, food, and supplies. We also meet up with our local backcountry guides and drivers, preparing to explore Kamchatka’s Ichinsky District for the next week.

Ilya and his wife Dasha are our indigenous Even guides and key to helping us visit the Taboons (nomadic reindeer herding communities on the tundra). 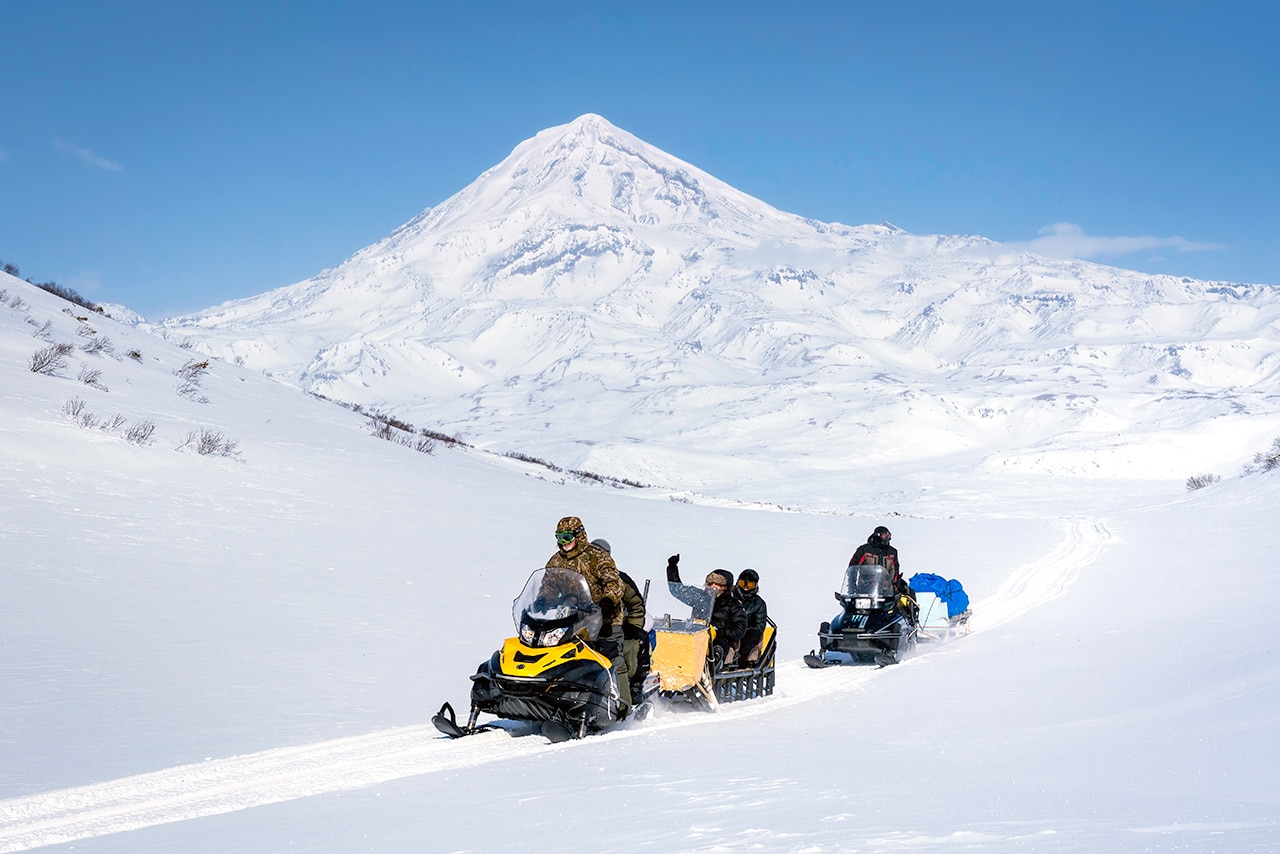 Snowmobiling through the Mountains of Kamchatka 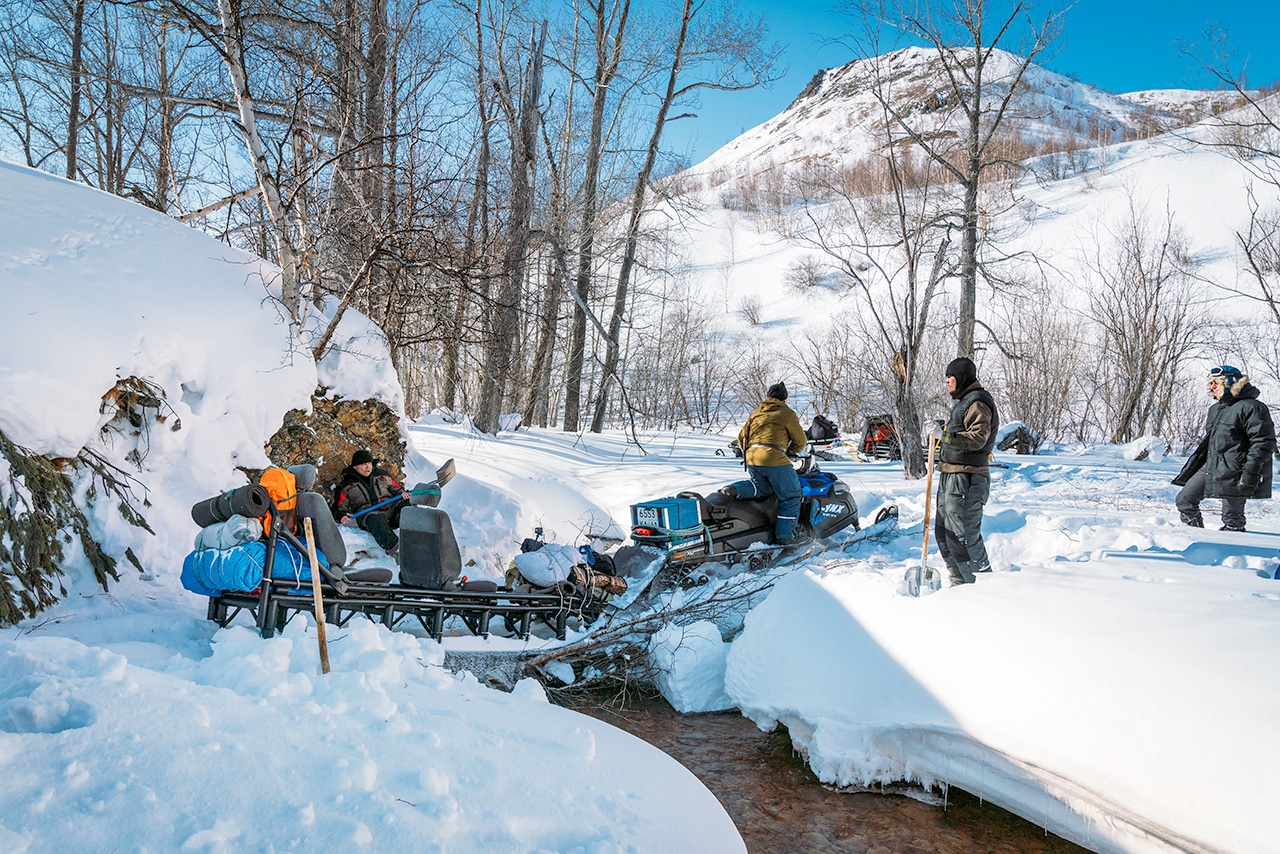 Leaving civilization, our small convoy of 5 snowmobiles pulls sleds full of gear (and ourselves) through forests of fresh snow under the shadow of massive volcanoes.

Sometimes you need to lean with your driver in order to navigate sharp turns, much like a motorcycle.

Occasionally dodging tree branches and always prepared to jump-off in an emergency to avoid getting crushed by the sled.

And jump-off we did, many times! When a snowmobile tips over into deep snow, it can take a good 10 minutes to dig it out.

Just traveling out to visit these reindeer herds was an adventure itself. 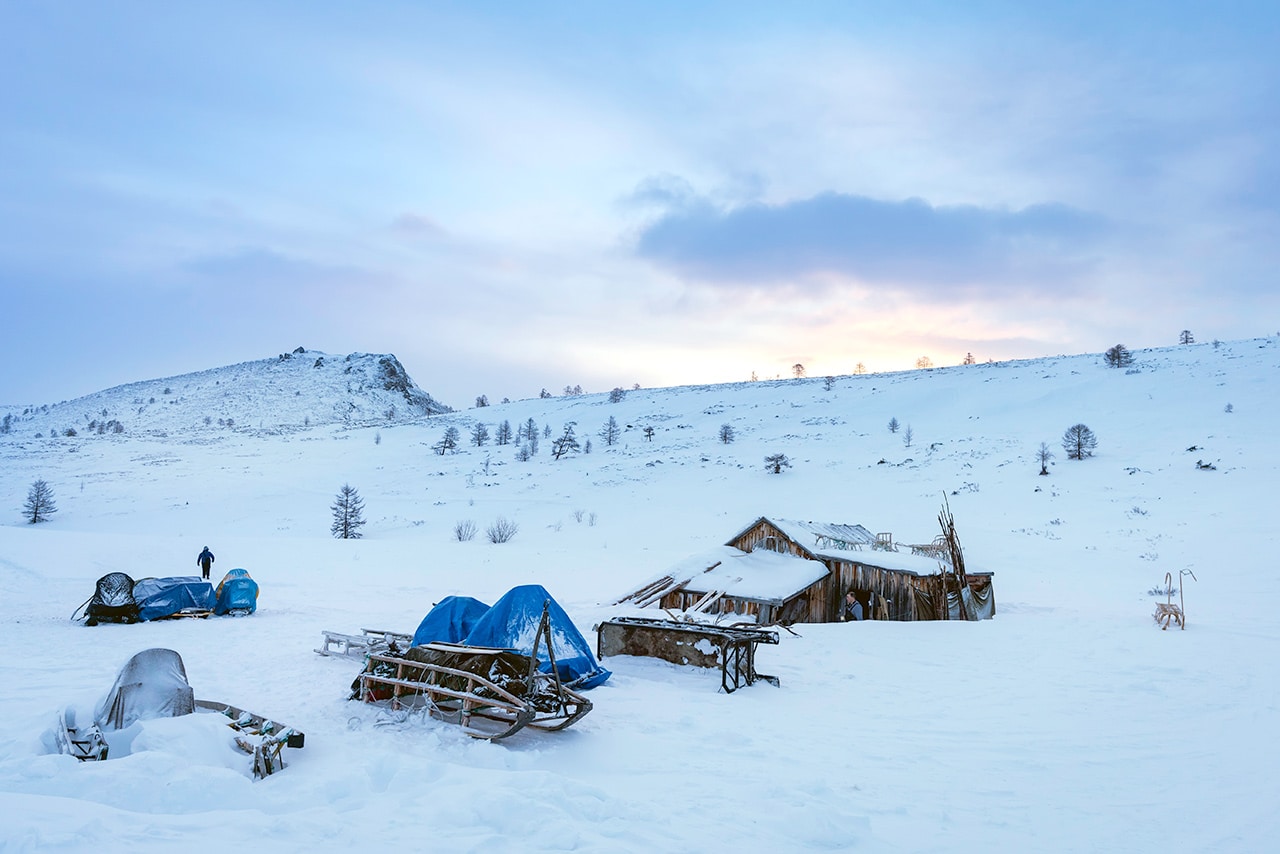 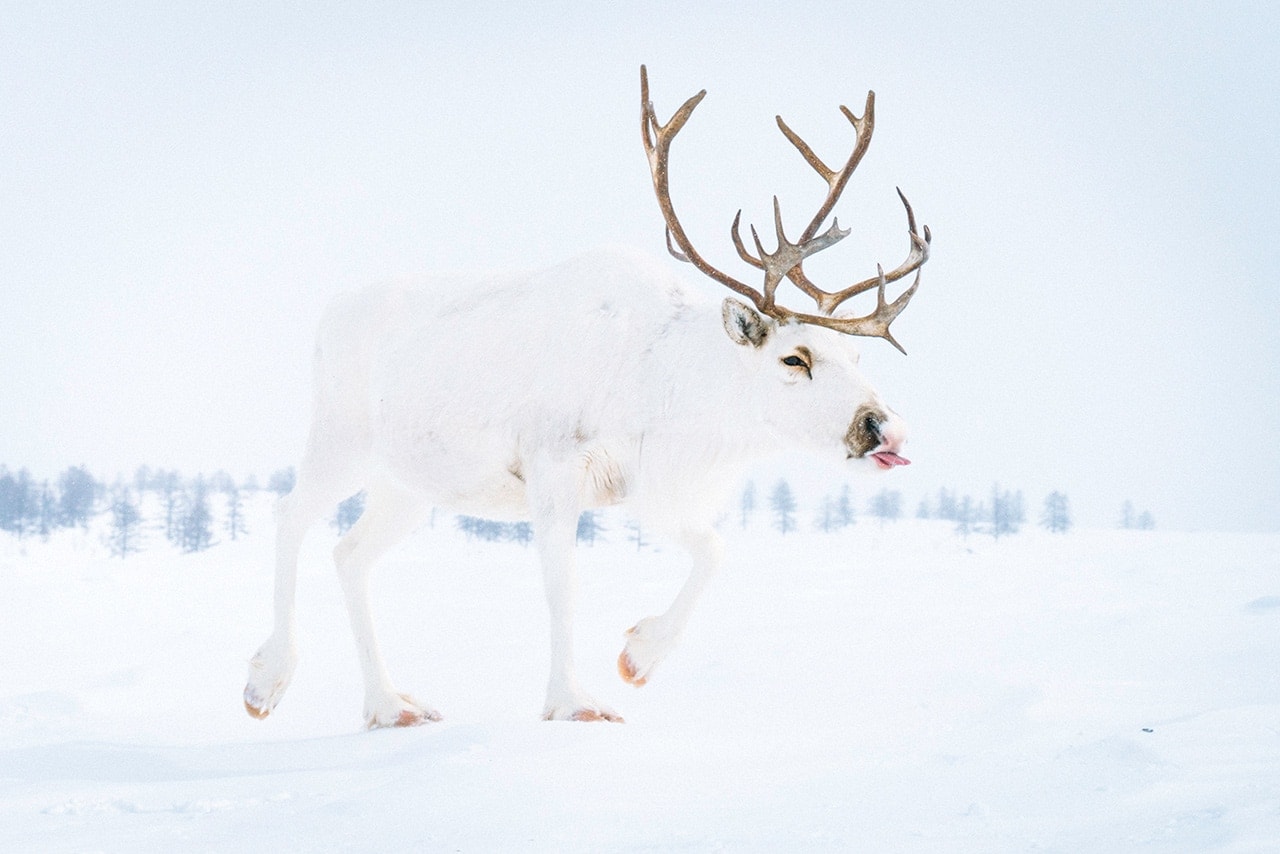 Did you know some reindeer are white?

After a long day of snowmobile travel through thick forests, high alpine tundra, steep mountain passes, and semi-frozen rivers in Kamchatka’s Ichinkski district, we arrive at the first reindeer taboon.

Kiryak Adukanov and his family have constructed a simple wooden cabin out here, from which to base themselves. They are , an indigenous group based in Siberia.

The Even have a long history of reindeer husbandry, making a living (and living off of) semi-domesticated herds of animals in Russia’s Far East and Siberian wilderness areas.

These days reindeer meat is sold to the Russian government and other companies around the world as a luxury product that can fetch up to $10 a pound. Antlers are sold to China and ground into “medicines”.

We spend an hour pitching camp behind a huge snow drift, including digging a “snow toilet” to protect us from the wind – which becomes important later. 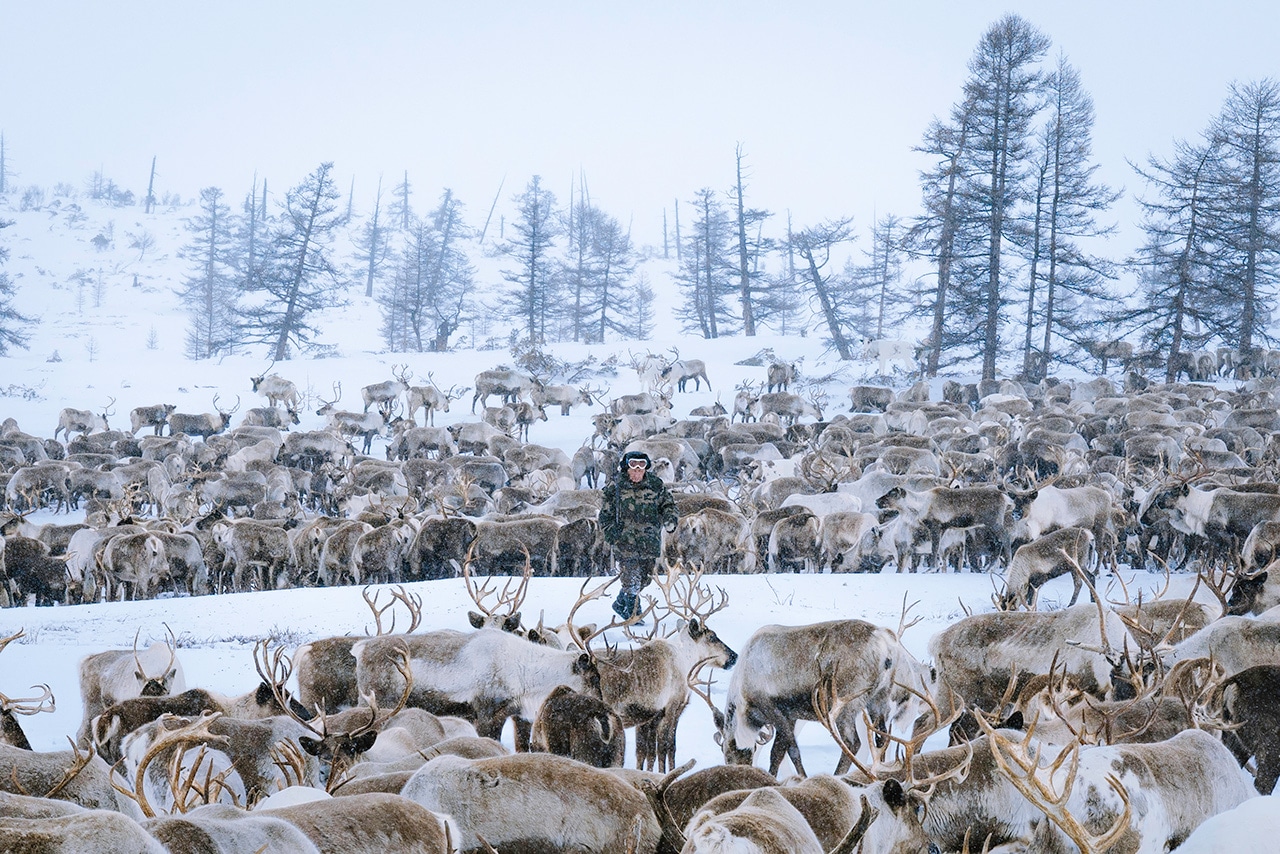 Kiryak walks through his herd of Reindeer… 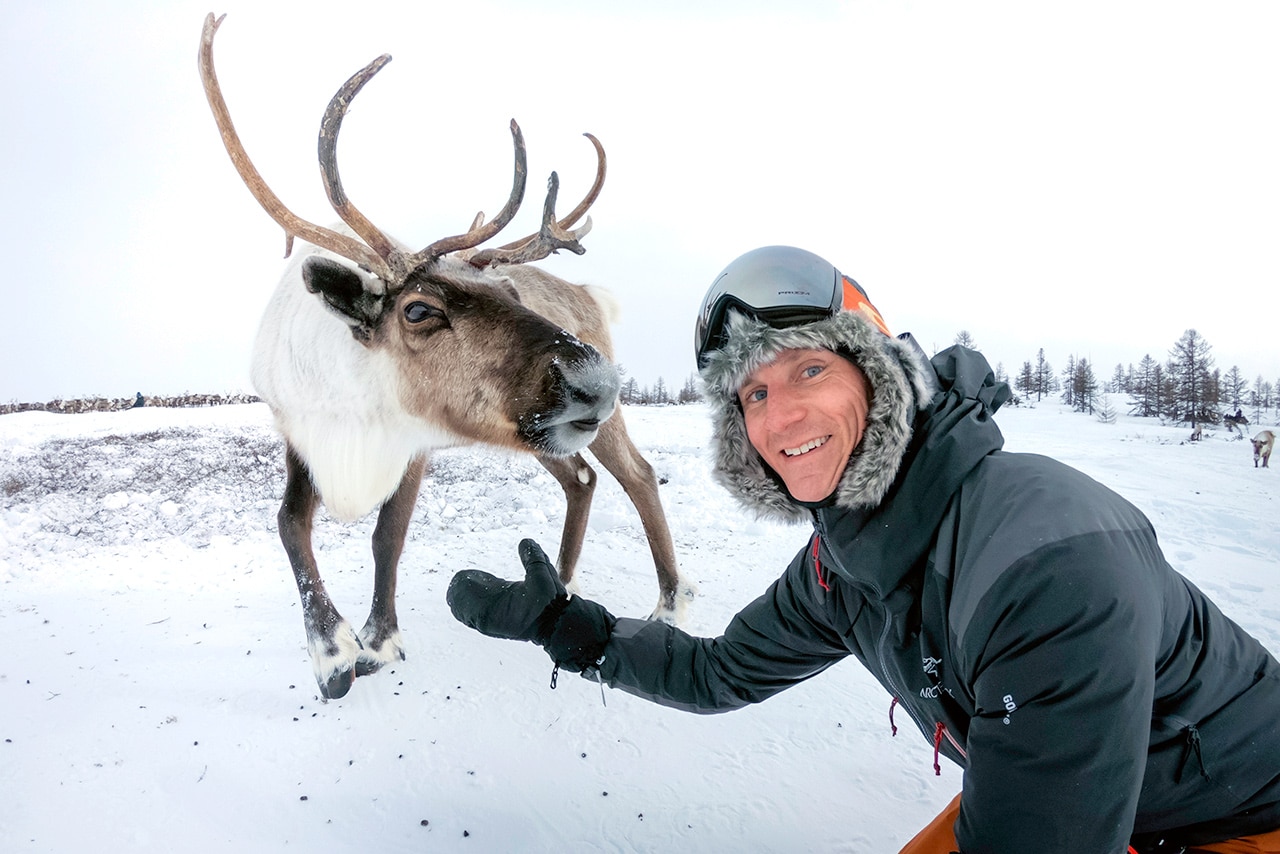 Hanging Out With The Herd

The next morning Kiryak takes us out into the forest to meet his large herd of reindeer, and it’s quite a sight!

Dressed in camo, with a rifle slung on his back, he shouts and whistles while trekking over the snow on a pair of homemade wooden skis — all 1200 animals following behind him like some kind of wilderness pied-piper.

The reindeer then begin to dig through the snow, munching away at the hidden grasses they prefer to eat. After they get comfortable with our presence, we’re able to walk among them, capturing photos and watching their behavior. 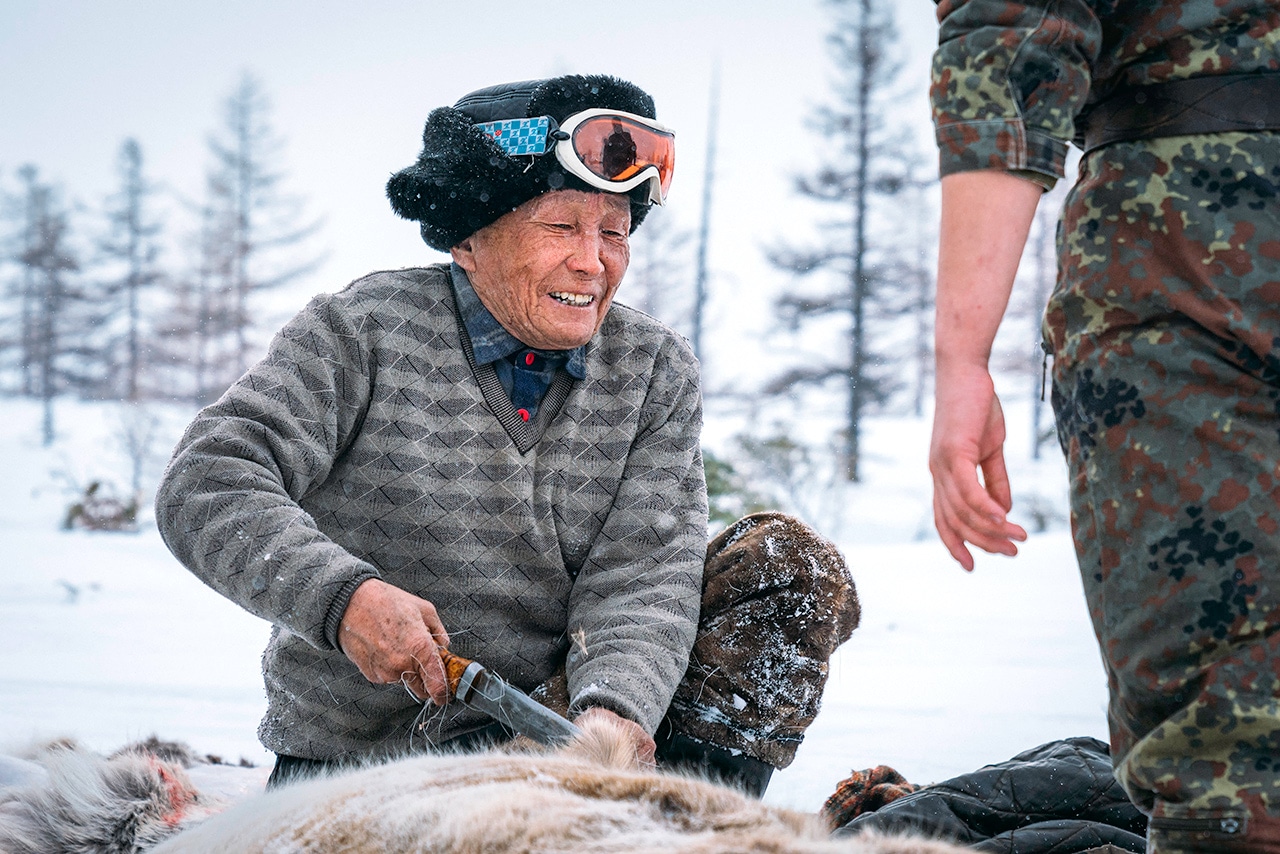 Skinning and preparing the animal for its meat. 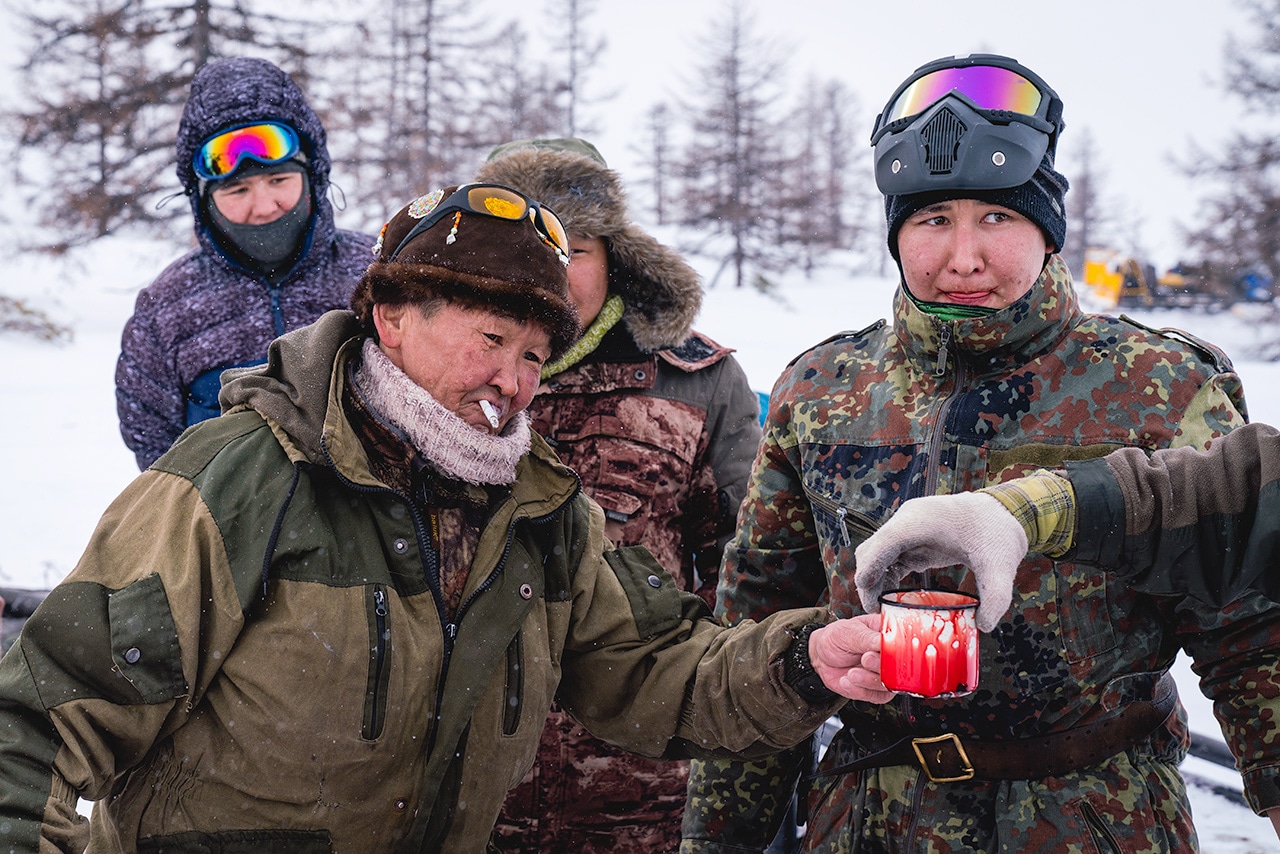 Local Tradition after a Kill…

Our hosts then proceed to shoot a reindeer, something they do every few weeks. The Even live off the meat and use the pelt as warm sleeping pads and protective clothing.

We’ve brought in supplies from the village to trade in exchange for a supply of fresh meat, which will sustain us for the rest of our voyage.

The only catch, is having to watch one get butchered…

Crazy winds blow through our campsite! 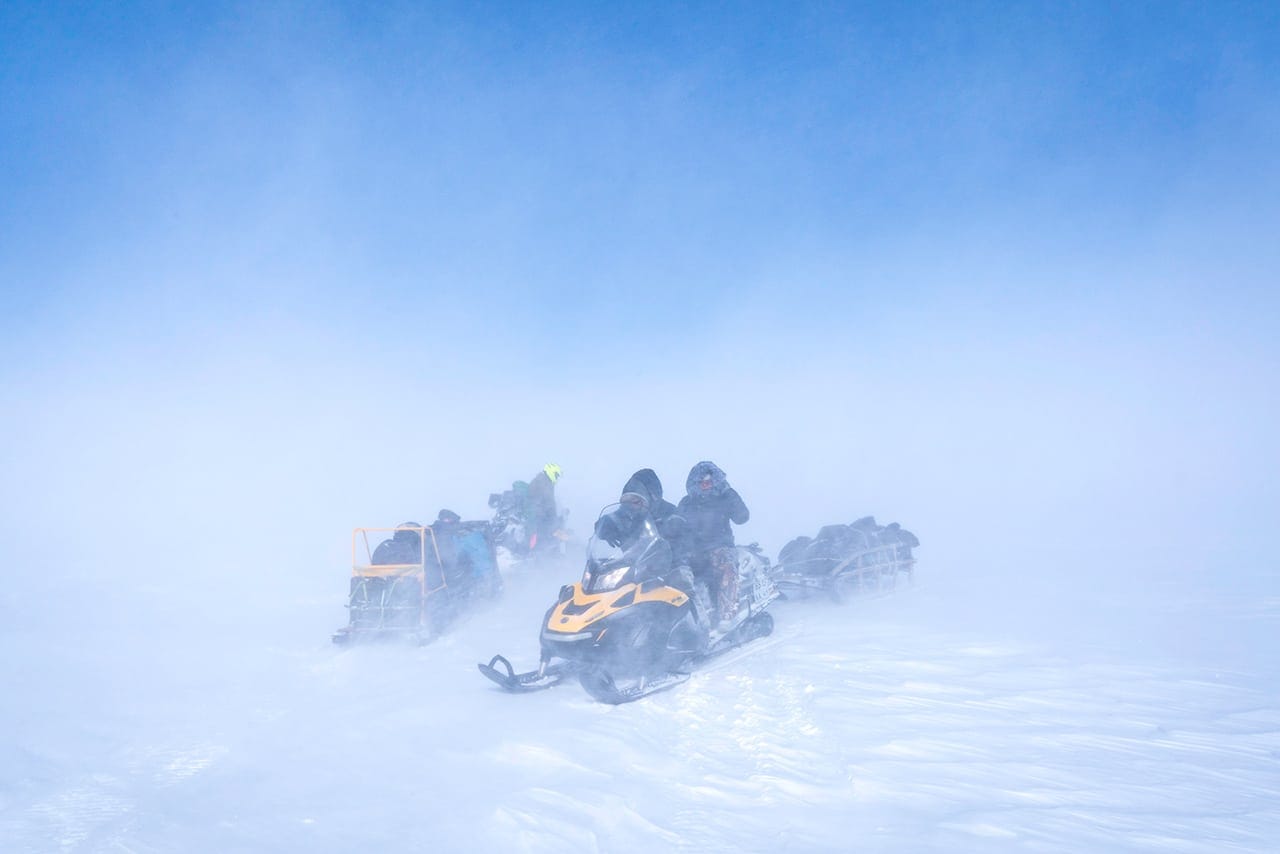 Snowmobiling on the Alpine Tundra

Back at camp, we fire up the stove and feast on tasty bowls of hearty reindeer stew before settling into our tents for the night.

However, sleep is interrupted around 4am when wind picks up drastically and buries our campsite with snow drifts. A layer of frost covers our sleeping bags.

The morning is chaos. Sixty miles per hour winds and sub-zero temperatures force us to break camp in the middle of a whiteout.

Not sure how long it will take us to find the next taboon, we evacuate back to Esso for a night due to the bad weather, some of us showing signs of frostbite. 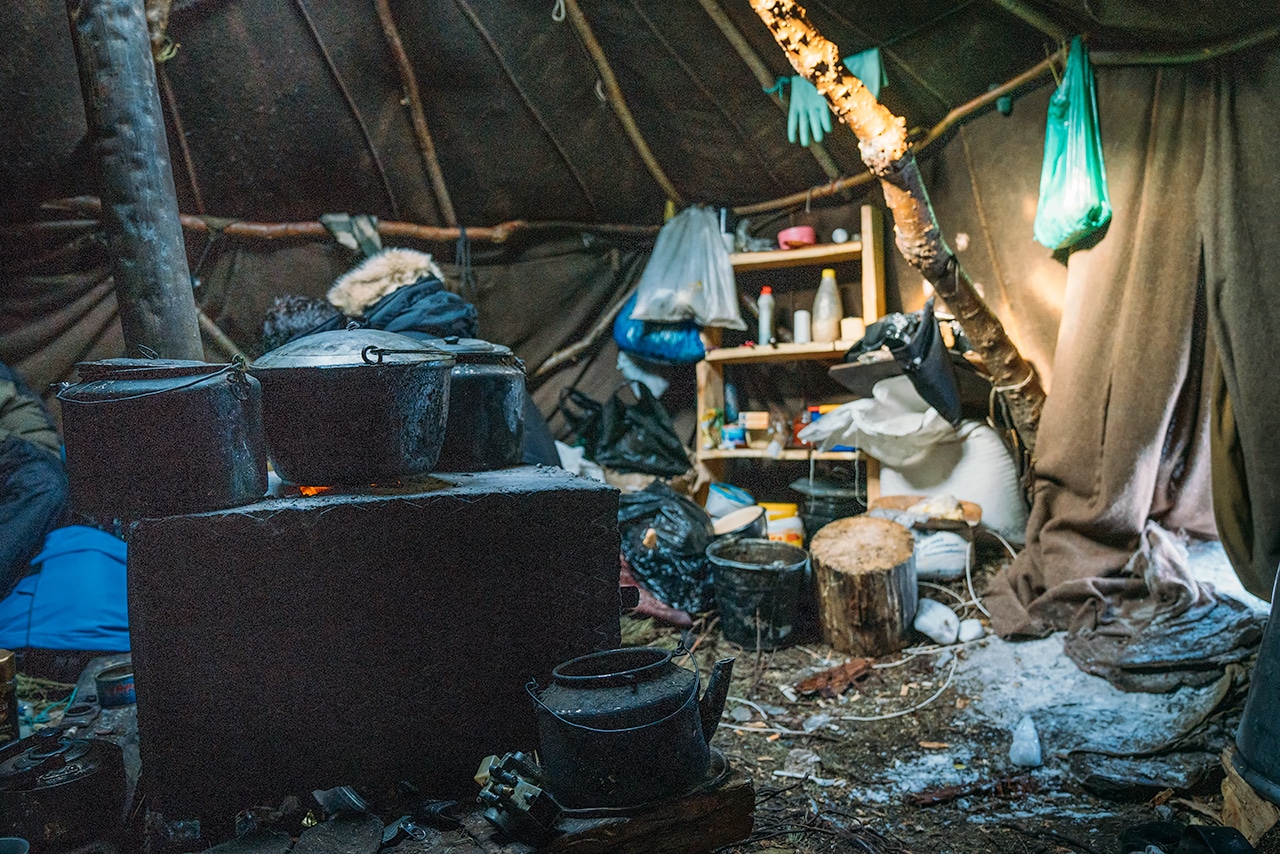 Legend Of The Whales

After our break in Esso, we’re back on the trail again, spending the next four days tracking down another taboon in the Russian backcountry.

Some families live in a portable yurt, moving with the herd every few weeks.

We’re staying in basic hunting cabins. My favorite of them sits at the base of snow-covered Ichinsky Volcano. At 11,834 ft. (3,607 m) tall, it’s the highest peak of Kamchatka’s Sredinny Range.

The Even people practice a form of shamanism. One legend is about a volcano spirit plucking five whales out of the ocean, one on each finger, and cooking them inside — causing the volcano to smoke.

Kamchatka has many natural hot-springs due to all the geothermal activity too. 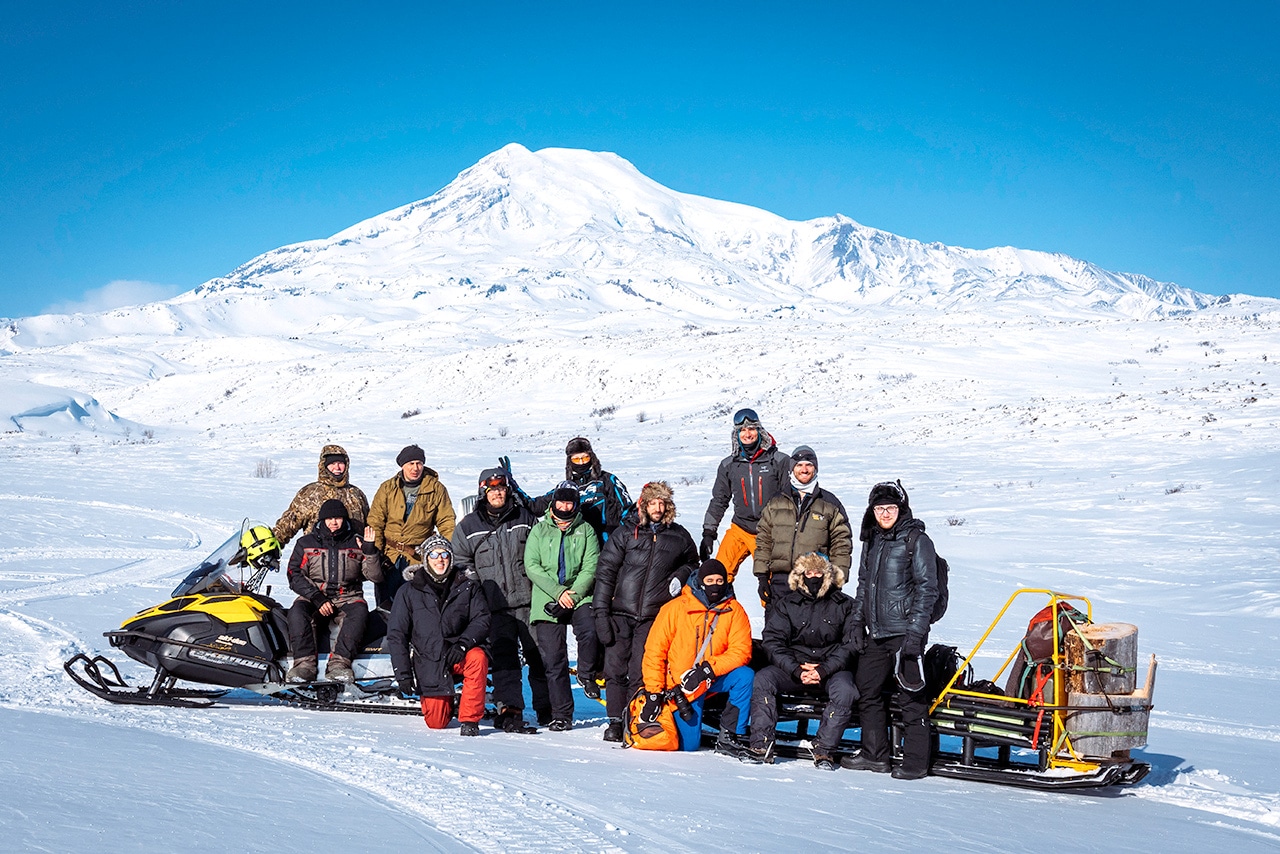 Our Expedition Team Under the Volcano 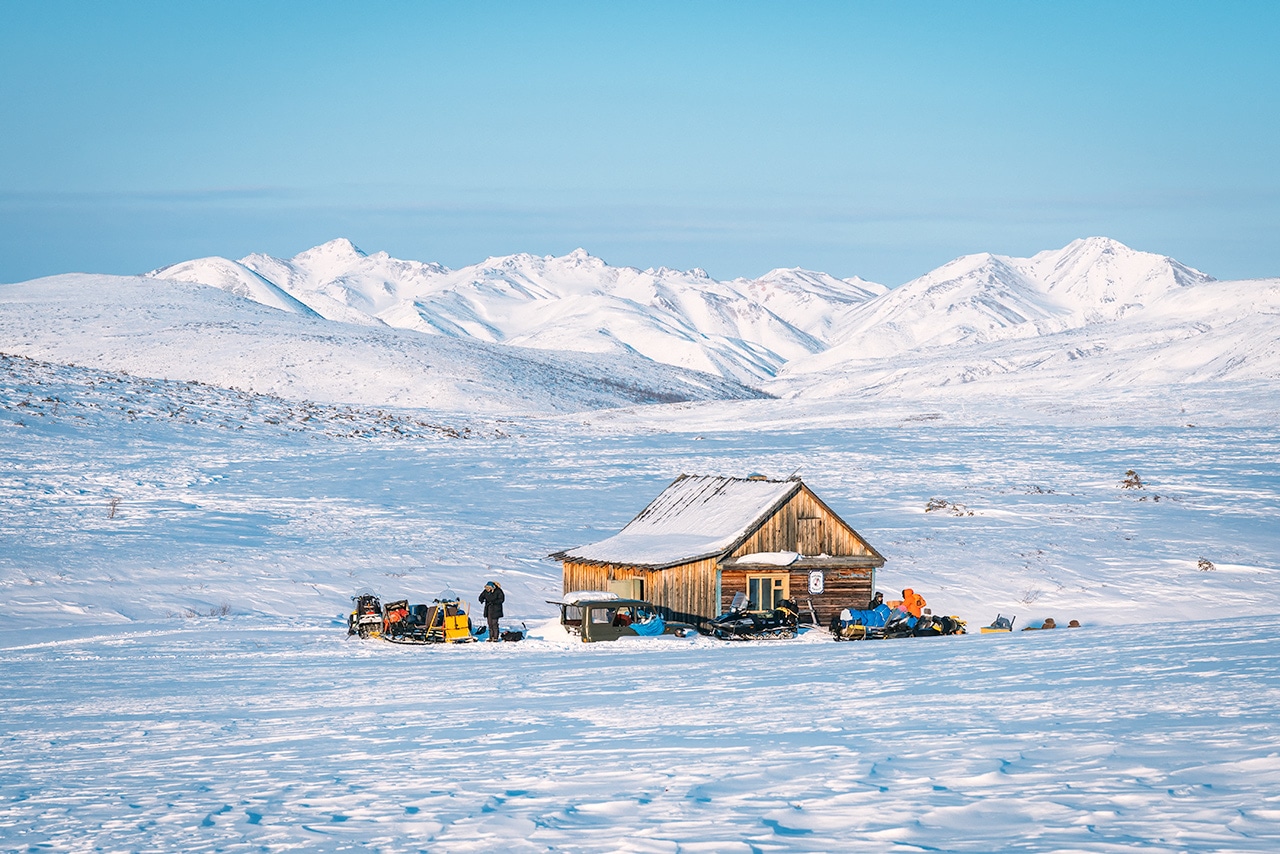 Riding back through the snow to Esso after a long and cold week in the Russian wilderness, I reflect on what we’d seen and experienced.

Kamchatka is a fascinating place. Full of rugged beauty, wildlife, and ancient culture. But without all the crowds of some more popular travel destinations.

I only hope the reindeer of Kamchatka continue to thrive, as there’s been a disturbing trend with global declines of reindeer and caribou populations partly due to climate change.