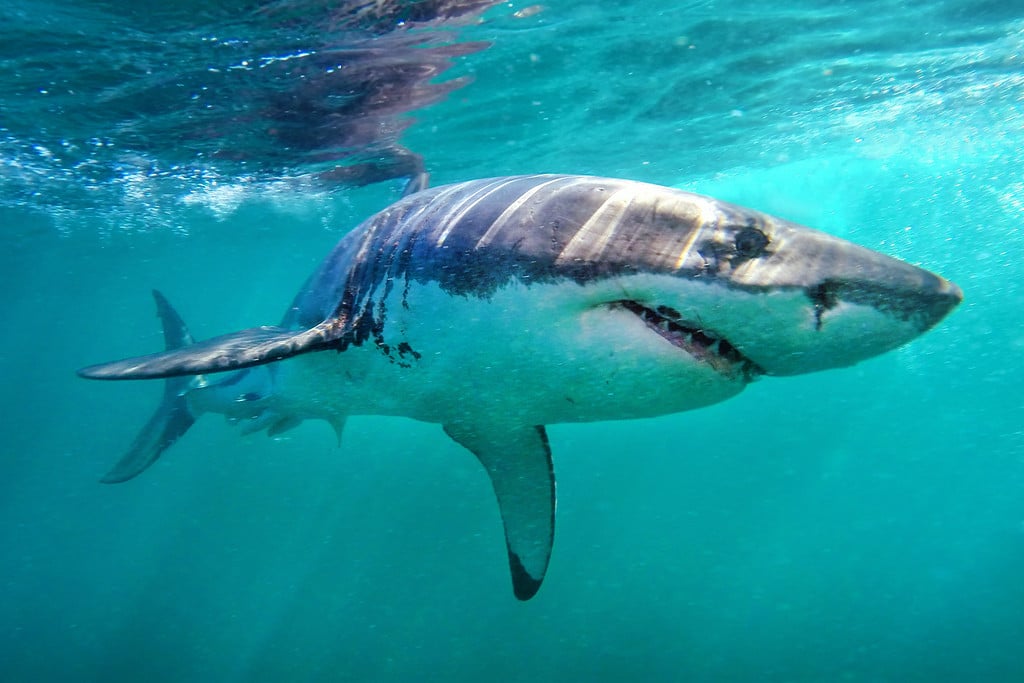 Suddenly a great white shark barreled towards me with black zombie eyes and razor sharp teeth only inches away from my face. Would this be my last adventure?

Luckily the cage stopped it. I was shark cage diving in South Africa and adrenaline was coursing through my body. Great white sharks are the ocean’s most lethal predators — meeting them up close is pretty intense.

The fact that these sharks are responsible for the greatest number of fatal attacks on humans added to my excitement. I grew up watching Shark Week on Discovery, now I was living it!

Shark Alley is a unique area off the coast of Gansbaai where sharks come to hunt seals. It has one of the highest concentrations of great white sharks in the world. 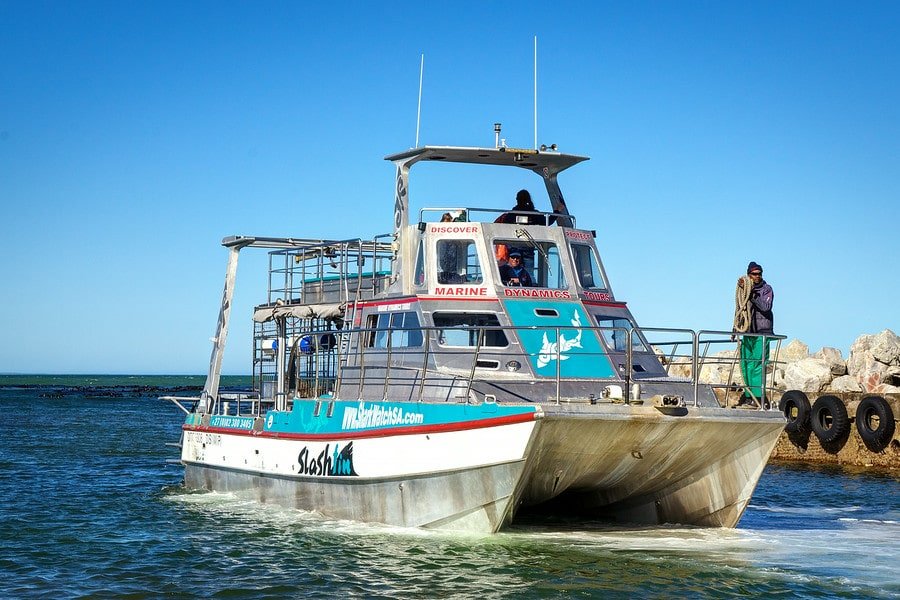 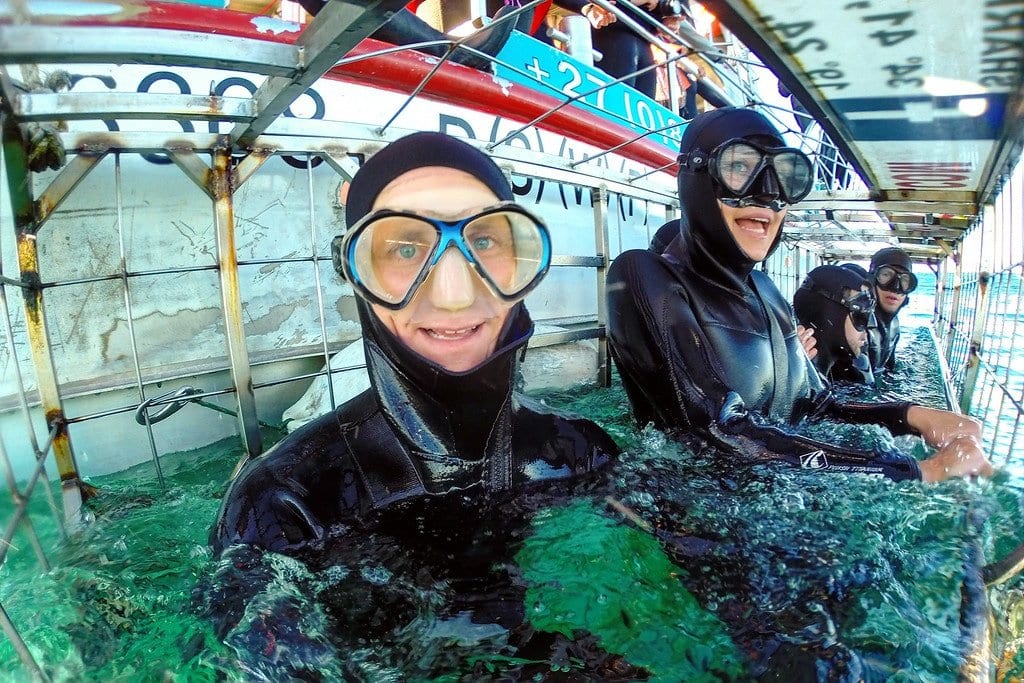 Inside the Shark Cage

Arguably the most feared animal under the sea, great white sharks have a notorious reputation. Growing up to 7 meters long and weighing over 3,000 kg, these pre-historic monsters can easily rip prey apart using powerful jaws armed with hundreds of serrated teeth.

Great white sharks are ambush predators, silently sneaking up on their victims from below at speeds up to 35 mph. They can even breach out of the water, soaring into the sky.

These sharks feast on tuna, rays, dolphins, seals, whales, sea turtles, and even birds. Along with an excellent sense of smell, they have a special 6th sense that can detect an animal’s electromagnetic field.

However the great white’s history of human attacks is what gives many people nightmares — or , fear of sharks. 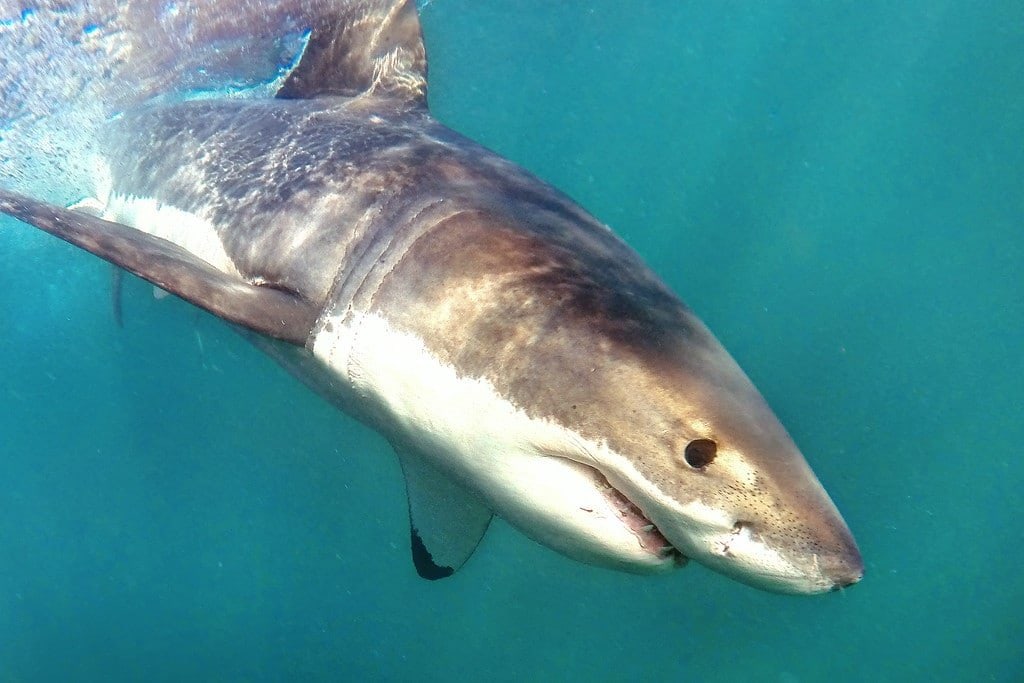 After breakfast and a safety briefing with our tour operator Marine Dynamics, we boarded , a custom-designed boat used for underwater shark watching excursions. It took about 30 minutes to motor into prime shark territory.

The shark cage was lowered into the water and strapped to the side of the boat as we pulled on thick wetsuits and weight belts. I was in the first group, and climbed down into the cage. That water is cold!

The cage is only partially submerged, with hand and foot rails inside. No snorkels are used, only masks. You keep your head above water until the shark spotters yell “DOWN”, at which point you take a deep breath and push your feet under the bottom rail, holding yourself underwater to watch the action.

What kind of action? The kind that makes your heart race… 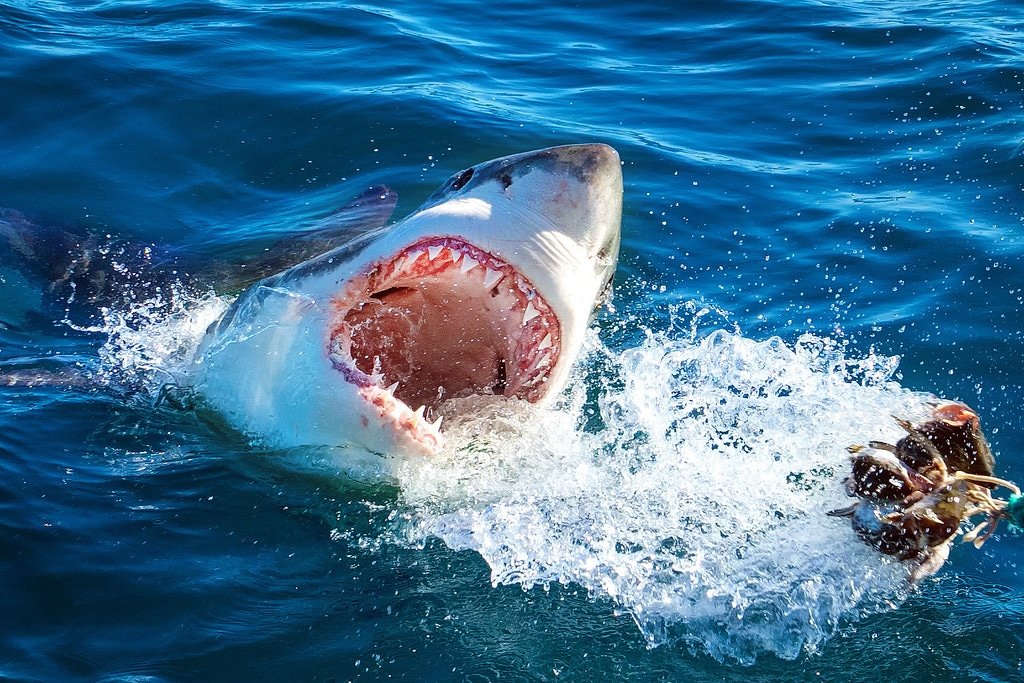 Our Shark Boat with Marine Dynamics

We watched 16 different great white sharks, some as large as 5 meters (15 feet) long, swim past us over and over again. The crew uses a few different methods to attract sharks.

First they “chum” the water, dumping a soup of fish blood & guts into the ocean that sharks can smell from a mile away. A line attached with fish heads is thrown in, plus a 2nd line with a plywood seal decoy.

The bait lines are only used to draw sharks closer to the cage, giving you an amazing up-close view. In fact, sometimes the sharks will slam right into the cage! But not because they want to eat you…

When attacking prey (or a plywood seal), great white sharks will roll their eyes into the back of their heads for protection. This is why they sometimes swim into or bite the cage. They just can’t see!

Watch a shark ram into my camera in the video below.

A friend of mine recently made an excellent comparison about shark attacks. Think of sharks as the bears of the ocean. Do bears kill people? Yes. Does that mean you’ll be attacked by a bear if you go hiking? No.

Let’s look at some hard statistics, shall we?

These things are more likely to happen than a shark attack:

Here’s the deal. People are ridiculously afraid of sharks.

When there’s a sudden increase in attacks, politicians are forced to act. It’s very similar to airline safety. There is no proof banning nail clippers actually makes us safer from terrorists.

Culling (aka killing) great white sharks is not the answer. They’re already on their way to becoming an endangered species because some Asian countries enjoy eating rare & exotic animals, like shark fin soup.

Over 40 million sharks are killed by fishermen each year. 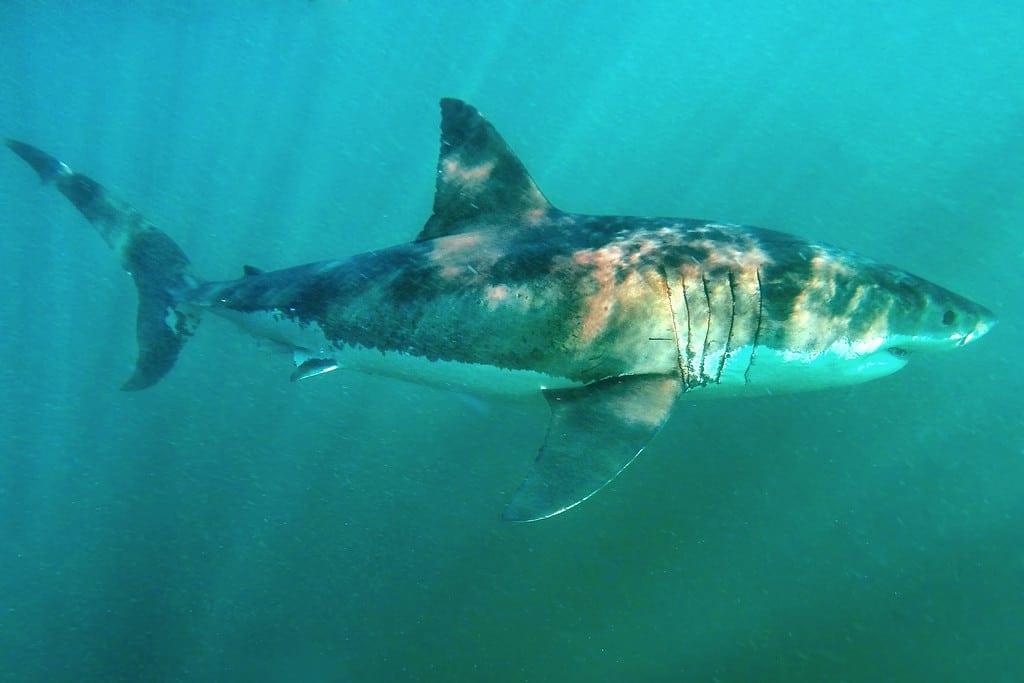 Our Shark Boat with Marine Dynamics

Chum is not food for the sharks, it’s just a scent. The ocean is full of fish guts already. The crew doesn’t actually let sharks eat those fish heads on the line either (although sometimes it happens). They pull it away from them.

Even in situations where sharks are fed directly, like during my cage-less Bull Shark diving adventure in Fiji, there’s no evidence proving that it leads to attacks on people. That particular company has been feeding bull & tiger sharks for 10 years with no increase in attacks around the island.

Most shark cage diving tours benefit these magnificent creatures by contributing money to research and conservation programs, that frankly wouldn’t get funded otherwise.

Our cage diving trip included a marine biologist who was recording data on the sharks we encountered for research purposes. They’ve found that the number (and size) of great whites returning to Shark Alley has been declining rapidly over the years, a disturbing trend. 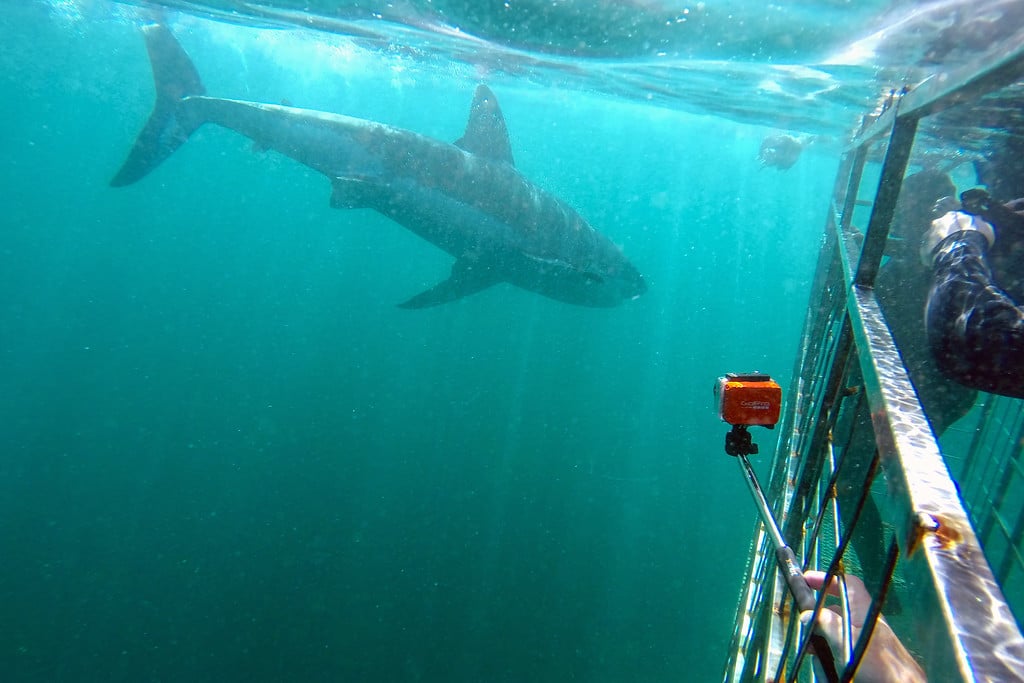 The best way to overcome your unrealistic fear of sharks? Get in the water with them! Once you see these amazing animals up close while learning about their habits from actual scientists who study them every day, you’ll see there’s nothing to fear.

Shark cage diving with great whites in South Africa is both exciting and educational. We need to protect these incredible ocean creatures before they’re gone forever. ★

Disclaimer: My trip was made possible in partnership with iAmbassador and South Africa Tourism.