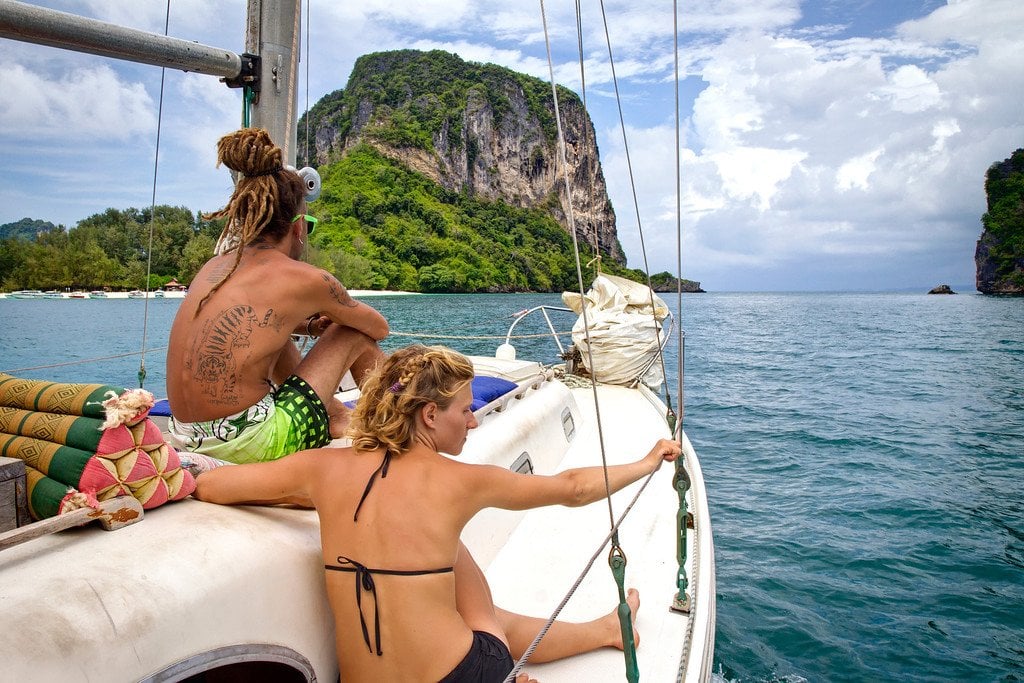 Sailing the Islands of Thailand

My forearms were burning. Sweat streamed into my eyes. There were no safety ropes. Suddenly I lost my grip on the rock and plummeted 35 feet off a cliff.

It’s called Deep Water Soloing. Psycho Bouldering. Psicobloc. Basically you scale rocky cliffs over the ocean without using ropes. The deep water below acts as protection when you fall.

There are certain areas of the world where the sport is quite popular, like the islands around Railay Beach in Southern Thailand.

The landscape around Railay is covered with striking Karst limestone cliffs jutting out of the earth. Climbers from all over the world flock here to test & improve their skills. It’s a rock climbing paradise. 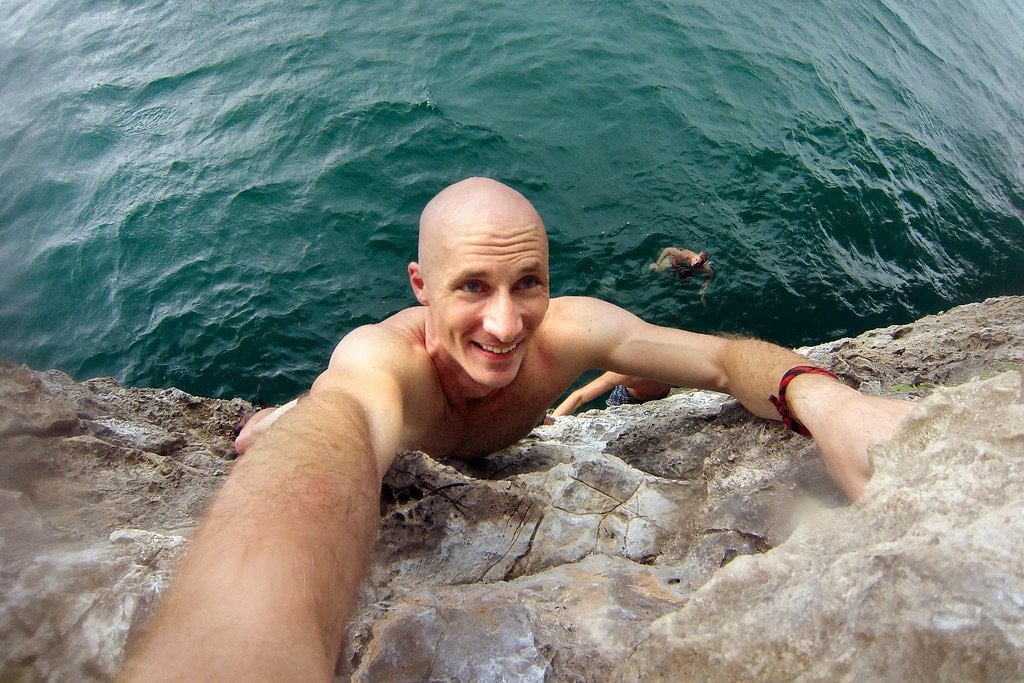 My Attempt at Deepwater Solo Climbing

I spent the previous day top-rope climbing with a company called Hot Rock Climbing School, and when I learned they’d be heading out onto the ocean for some deep water soloing, I jumped at the chance.

The next morning a group of us loaded into a wooden, V8 engine-powered longtail boat and motored towards a small sailboat that was waiting in the bay. I’d be spending the day climbing with a couple from California and 2 guys from Finland.

We all had some basic rock climbing experience, but were definitely not pros — and none of us had ever attempted deep water soloing before!

The draw to this type of climbing is the ability to scale cliffs without messing with ropes, harnesses, anchor points, or any other climbing tools. It’s just you versus the rock.

How high you go depends completely on your skill and personal limits. Are you prepared to fall off the rock at 60 feet or higher?

With an old pair climbing shoes on, I dove off our sailboat and swam up to a sheer 200 foot limestone cliff protruding out of the sea. Many of the walls here have a bit of an overhang next to the water, so ropes or rope ladders hang down to help with getting into position on dry vertical rock. 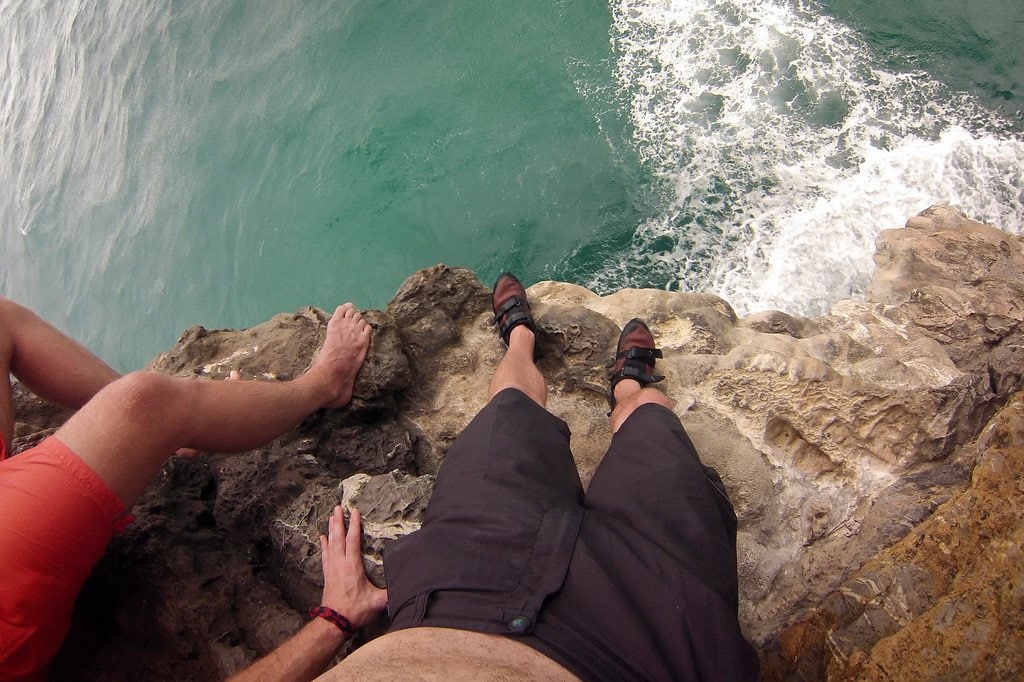 Climb Until You Fall Off

Luckily previous climbers had stashed towels in little holes at the beginning of the routes, so you could dry your hands off and even rub them in a bit of chalk. We took turns maneuvering up the walls searching for footholds and trying to conserve energy.

Eventually you’d hit a spot where you couldn’t continue, either because you were too tired or because it was beyond your ability. For our group, this was usually around 30-40 feet up. Then it was time to push off the rocks and crash down into the waves of the ocean!

We spent 3-4 hours repeating this cycle at 2 different islands that day. 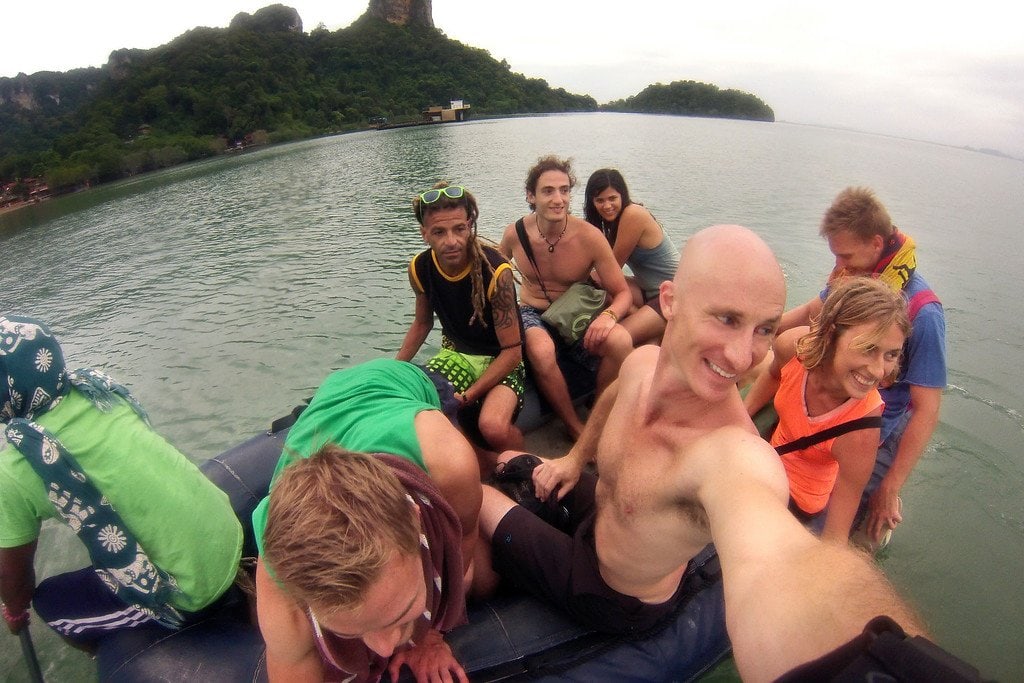 Who Needs a Motor When You Have Sandals?

The weather started out nice, but storms rolled in darkening the sky and unleashing a downpour with lightning. That didn’t stop us from having a great time deep water soloing Thailand’s island cliffs. It’s a lot more difficult than it initially looks. I love a good challenge.

On our way back to the mainland all eight of us boarded a tiny rubber raft to motor towards the beach from the sailboat.

But soon the weak 5hp outboard motor ran out of gas. We were still 300 yards from the beach! Luckily our captain was prepared with half a broken oar, and the rest of us helped paddle in using our sandals.

It was a hilarious way to end a fun day of adventure. ★