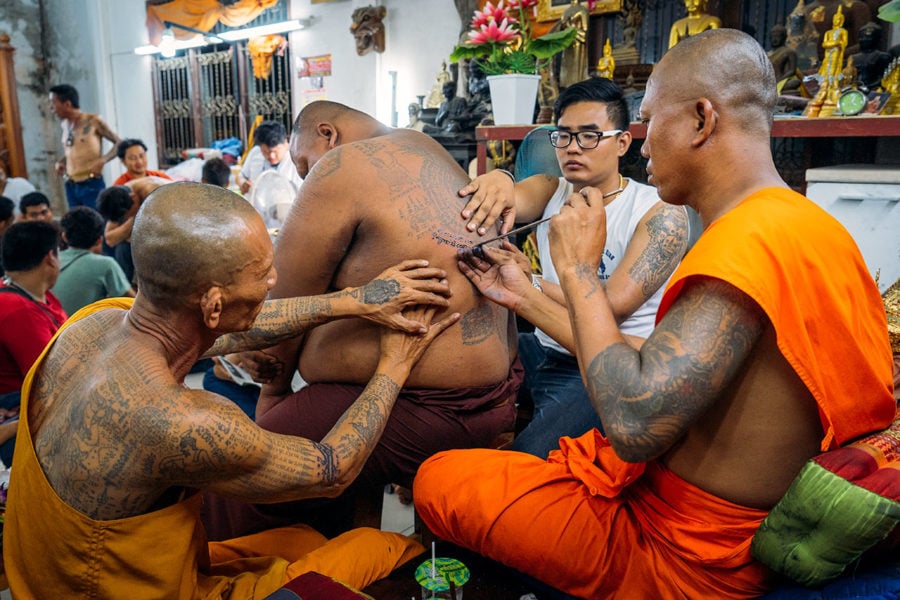 Getting a Sak Yant Tattoo in Thailand

Over 40 people watched in silence as a famous Thai monk repeatedly penetrated my flesh like a sewing machine. His Sak Yant needle sent waves of searing pain into my back.

They are believed to give the wearer magic powers associated with healing, luck, strength, and protection against evil.

Often covering their entire bodies from head to toe in magic symbols to prevent knives and arrows from piercing their skin.

Traveling around Southeast Asia while living out of my backpack, I learned about these tattoos from some fellow travelers and thought it sounded like a cool experience. 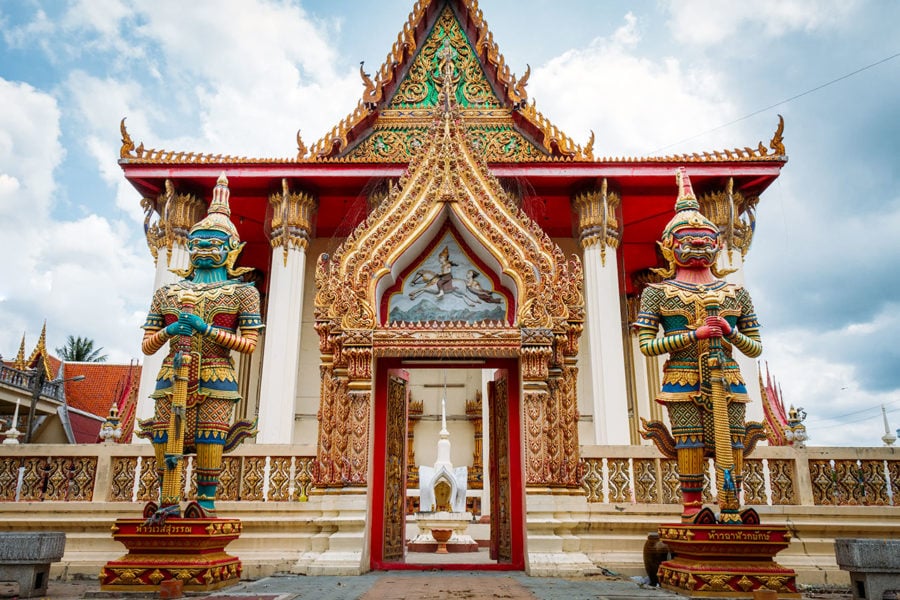 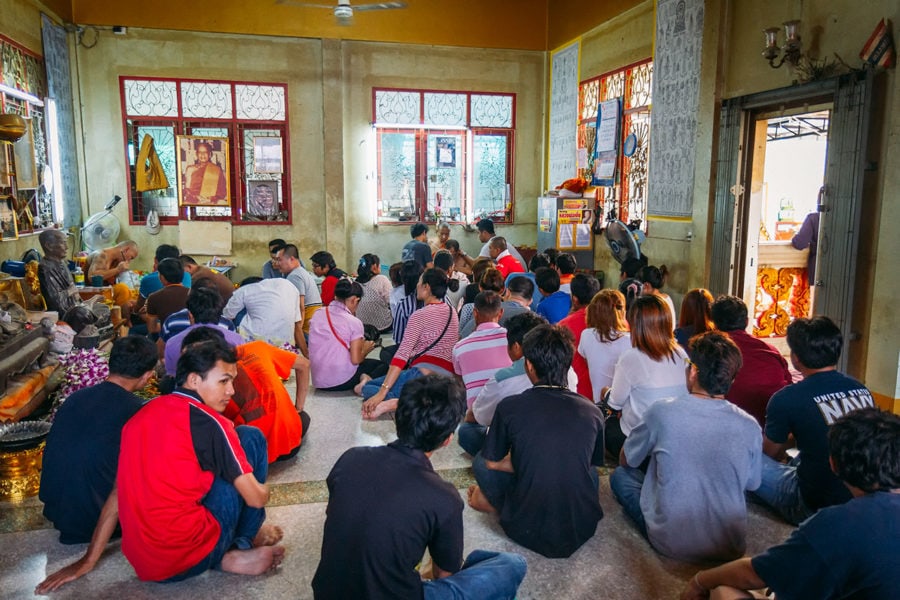 Waiting for My Turn

I’ve never had a tattoo before. Long ago I decided that if I ever received one, I wanted it to be special. Not some drunken challenge in the middle of the night.

So when I learned about the magic-infused given out by Buddhist monks in Thailand, I was intrigued.

The more I learned about them, the more I wanted one.

No machines are used to create a Sak Yant design. These traditional Thai tattoos are engraved into the skin with a long metal spike or bamboo sharpened to a point.

The needle is dipped into ink and repeatedly jabbed through your flesh by hand.

Monks will often choose a sacred design, as well as the location of your tattoo based on your aura. This sounded perfect!

I’ve had trouble picking a tattoo, so why not let a monk choose for me? 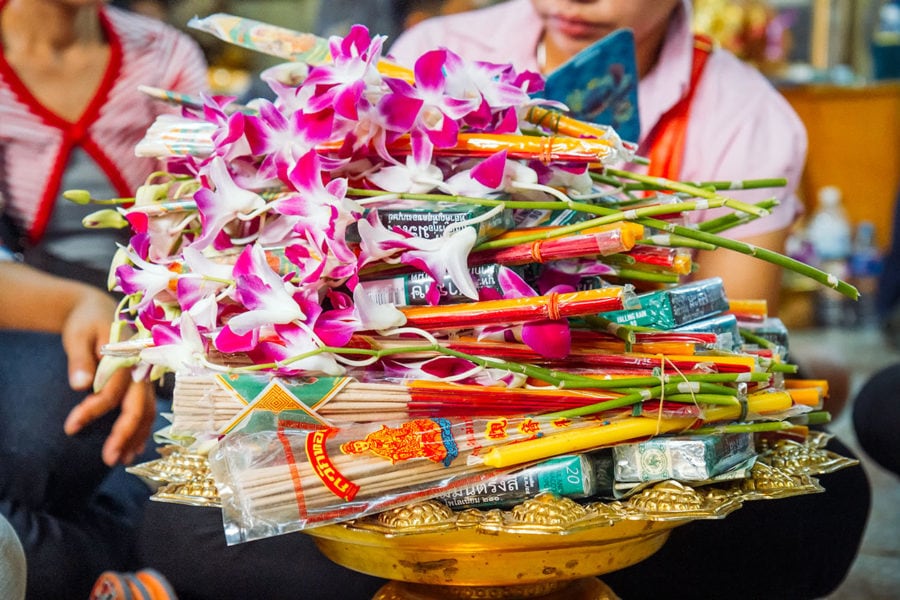 Donations of Cigarettes, Flowers, and Incense

The best place in Thailand to receive a Sak Yant tattoo is a Buddhist temple called Wat Bang Phra.

For hundreds of years, the temple has been a pilgrimage site for Thai people wanting to receive the protection of a magic tattoo, inspiring them to travel long distances.

The grounds of Wat Bang Phra are composed of a series of beautifully ornate temples surrounded by colorful statues. I made my way towards the tattoo building located in the back. 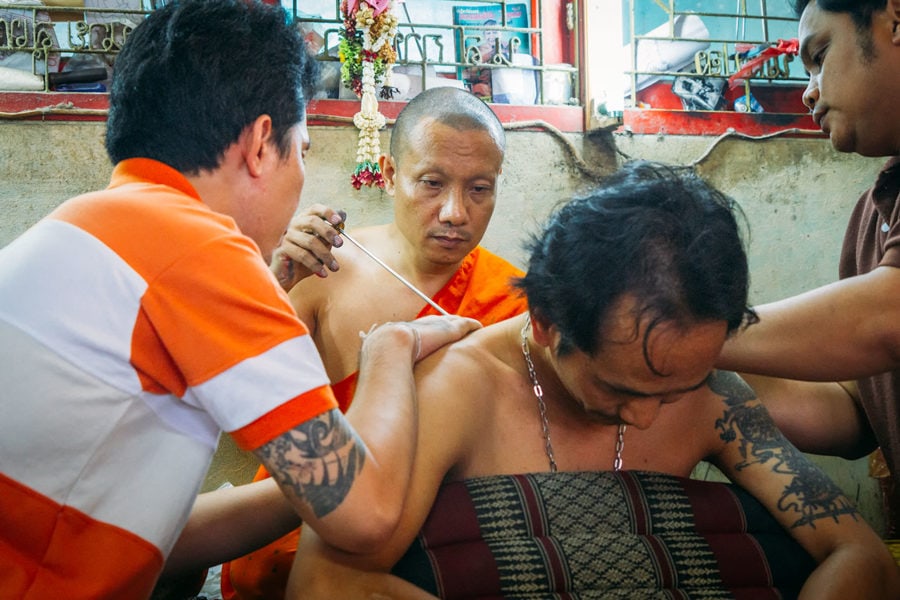 Outside the entrance, I purchased a temple offering consisting of orchid flowers, incense sticks, and menthol cigarettes for 75 baht ($2.40 US) before removing my shoes and heading inside.

Everyone is expected to present these simple gifts to the monk as payment for a Sak Yant tattoo.

The items are then recycled so the process can be repeated, with money from the sales helping with the upkeep of the temple.

Ceiling fans slowly whirred overhead, but the room was still hot — as there were 30 to 40 people packed inside. 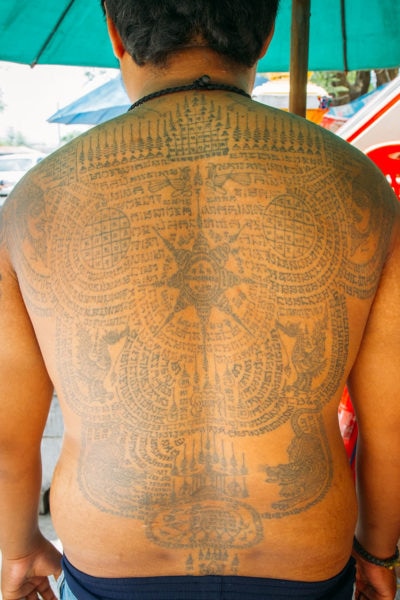 That’s a Lot of Magic!

Waiting For My Sak Yant

It seems I’m not the only one wanting a tattoo today. Master Luang Pi Nunn is in demand here and etches up to 50 Sak Yant tattoos a day. If you don’t visit the temple early enough, you may not get one.

Due to some miscommunication with a motto-taxi driver that morning, I arrived about an hour later than expected. I’d just have to wait my turn and hope for the best!

So I found a spot on the floor and attempted to make myself comfortable over the next 4 hours. The long wait allowed me to witness many others receive their own tattoos.

Eventually, Luang Pi Nunn took a break while the rest of us continued to sit in silence, listening to bird song and cats meowing outside. By now I was up front though, with a great view of his tattoo workspace — and I have to admit it was a bit shocking! 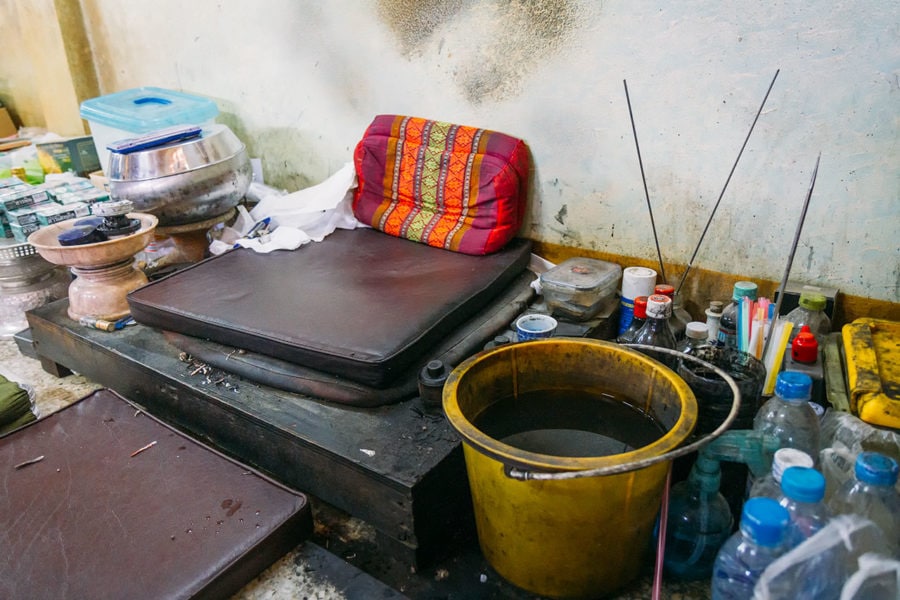 Not Exactly a Sterile Workspace…

The safety of Sak Yant is debatable. It can be a risky practice. The needle itself is usually wiped with an alcohol pad after each tattoo.

Or it might be placed in a bottle of alcohol while a separate needle is used for the next person. But the same pot of ink is used with everyone, and blood can mix with the ink.

This opens up the possibility of contracting HIV or Hepatitis. There are no hard statistics though.

After getting a close look at his tools, I got a bit nervous and briefly thought about backing out. This is not the kind of thing you should do if you want to practice safe travel…

The workspace consisted of a few cushions surrounded by bloody rolled-up pieces of toilet paper, a nasty bucket of inky water, old plastic bottles full of rubbing alcohol, and grime caked onto the walls.

I’d also just watched at least 12 people get jabbed with the same couple of needles. And who knows how many went before I arrived.

But then I realized that if it was truly dangerous, there wouldn’t be so many people waiting in line to get one. Right?

Or is the whole room just full of crazy people with a death wish? 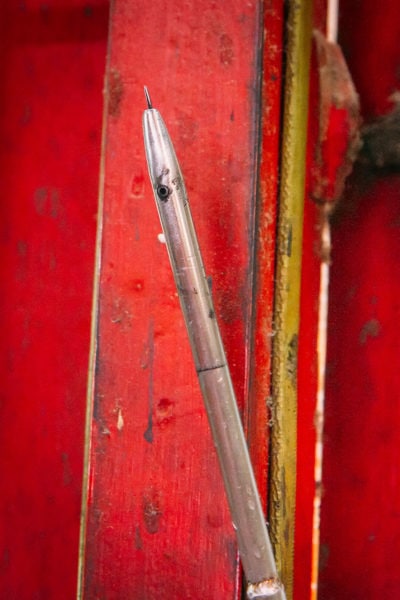 I didn’t have long to ponder though, as the monk soon returned and it was my turn to help hold the next person’s skin while he worked. This gave me an excellent view of the whole process. It was mesmerizing to watch.

Suddenly it was my turn. Pulling off my shirt, I respectfully bowed three times before turning my back on the man who was about to repeatedly poke a sharp needle into my skin.

Occasionally a monk will deem a person unfit to receive a Yant if they don’t take it seriously, refusing to work on them.

Two local guys held my skin tight as I braced for first-blood. Not knowing what image I was about to get.

Each monk concocts his own special blend of magic tattoo ink too. The recipe is secret, but is thought to contain Chinese charcoal, snake venom, palm oil, and even human remains! 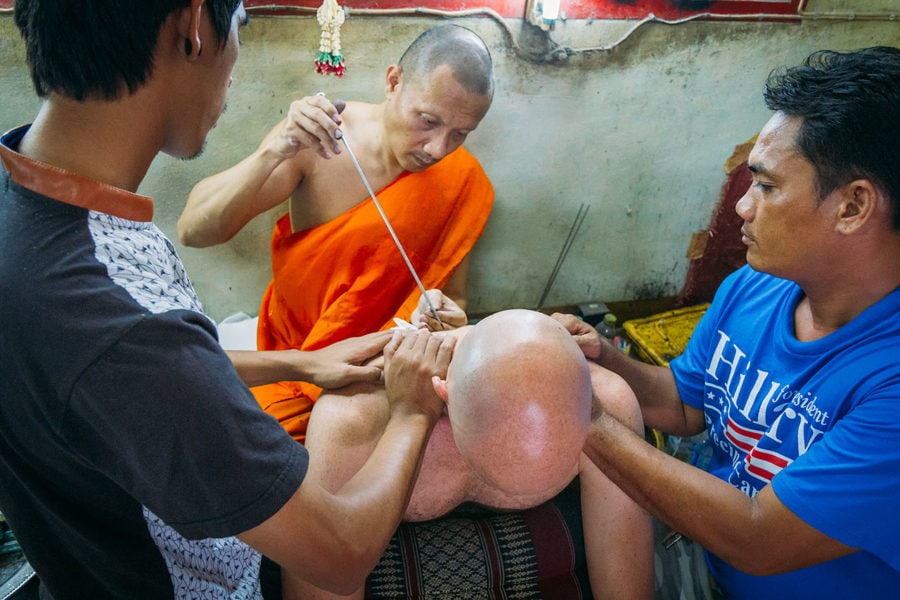 When the needle first punctured my skin, it felt like a bee sting. Followed quickly by a swarm of bees launching a full-scale attack.

My muscles tensed up and I began to sweat. Squeezing a pillow in my lap while attempting to look tough for the 40 Thais attentively watching the foreigner for any signs of weakness.

But surprisingly it didn’t hurt as much as I thought it would. Initially, I was afraid my eyes would water, or worse, I’d pass out in front of a room full of people…

Yet after only 10 minutes and a thousand needle strikes later my new Sak Yant was nearly finished!

To complete the sacred tattoo, Luang Pi Nunn chants a Kataa (or magic spell) and blows it into the design unleashing its power. 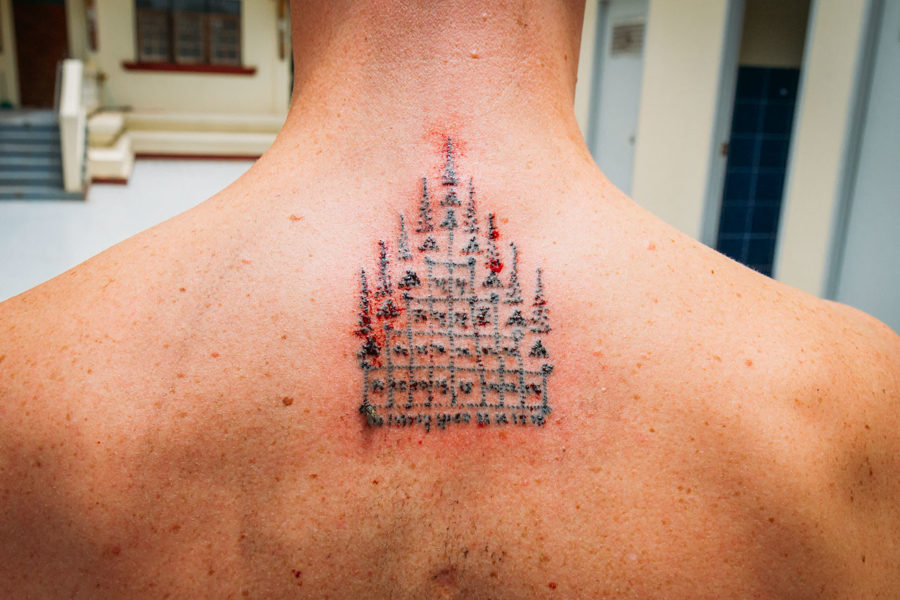 So which tattoo did the monk give me? It’s called the , or 9 Spire. A powerful and sacred tattoo that protects the wearer from violent physical attacks and magic assaults. It’s also supposed to bring good luck.

The 9 spires represent the 9 peaks of Mount Meru — a legendary mountain from Buddhist and Hindu mythology that is thought to be the center of the universe.

Atop each peak sits a small Buddha, with the spirals above them representing the path to enlightenment.

Inside the boxes are symbols written in , an ancient Cambodian alphabet, but the language itself is . The same mantra is actually written on each side. A mirrored image of itself. It reads: Gu Ti Gu Ya Tha Saa Wae Taa Saa Gu – Gu Gu Ti Saa Tha Ya Gu Saa Taa Wae

Apparently there are also 11 special rules that go with my Sak Yant: 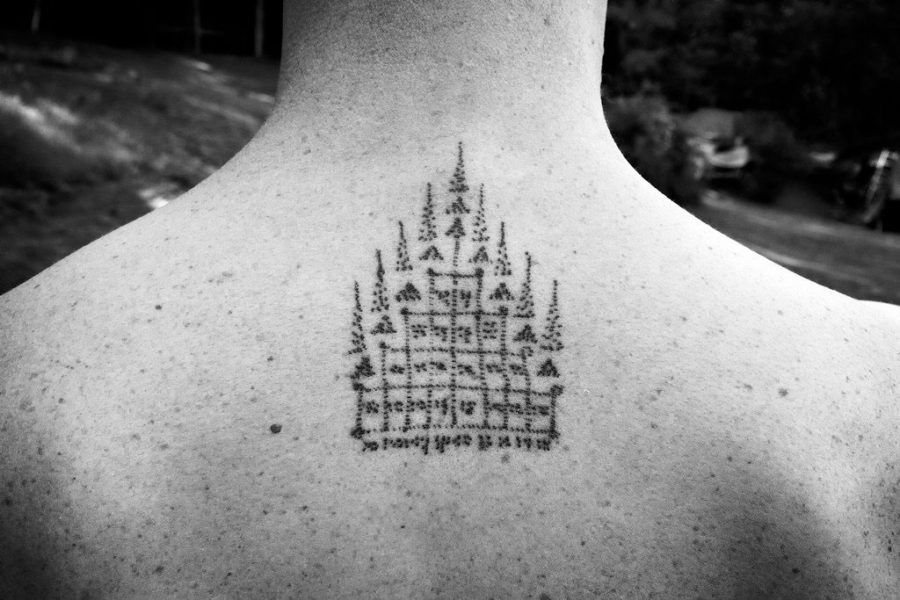 My Tattoo After Healing

Would I Do It Again?

Yes. Absolutely. I may get another one too. In fact, I’ve learned that the magic needs to be replenished each year with a fresh blessing by the monk. So I’ll have to go back eventually one day anyway.

Thai people from all levels of society take the practice very seriously, and many completely cover their bodies with sacred Sak Yant tattoos.

Women can get them too. Angelina Jolie is probably the most famous.

But because it’s forbidden for monks to touch female flesh, they’ll use a cloth or gloves to prevent contact with women.

Some people choose to receive an tattoo, by using palm oil on the needle rather than dark ink.

I’m very happy with my Sak Yant, it was a wild experience I’ll never forget. Especially with this permanent souvenir on my back!

The monestary is located at Nakhon Chai Si, Thailand.

My sak yant tattoo only cost ฿75 THB (about $2.50 USD) plus my additional personal donation, however after a few years it turned into a backpacker and they are now charging MUCH more up front.

I’ve heard from others that it has completely lost its authenticity, and often actual monks are no longer doing the tattoos.

NOTE: This monastery holds an annual Sak Yant Wai Kru tattoo festival, which is quite an experience! ★