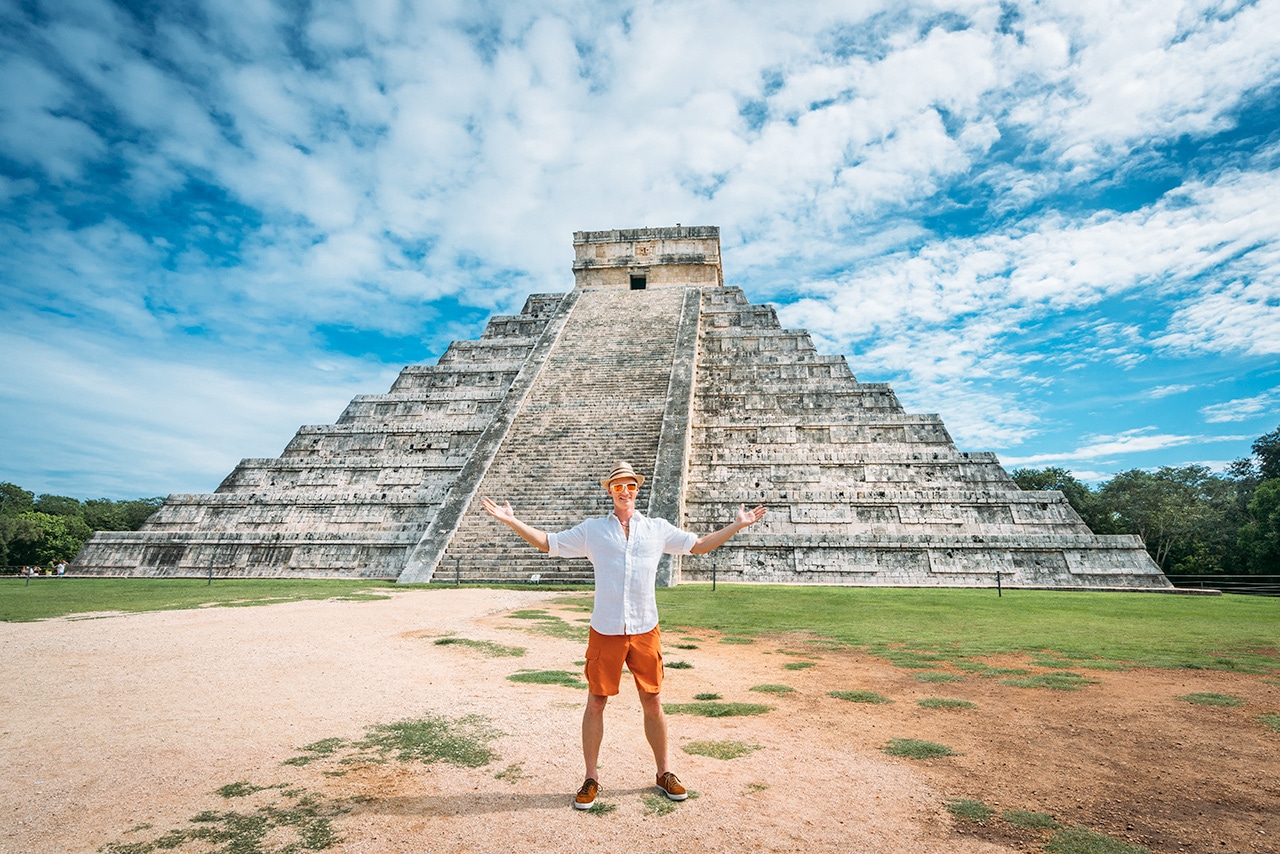 The history of Chichén Itzá is not for the faint of heart. These ancient Mayan temple ruins in Mexico are shrouded in mystery and have a way of haunting you long after returning.

Once you finally get past an army of local vendors at the entrance, the ancient stone carvings of fearsome creatures and bloodthirsty warriors at Chichen Itza inspire awe and trigger unease at the same time.

This pre-Hispanic city (and UNESCO World Heritage Site) has a fascinating 1,000-year-old history. It is the second most visited archaeological site in Mexico, partly due to its close proximity to Cancun.

Located in the Yucatan Penninsula, the ruins are extensive and cover 740 acres. Many sections have still never been excavated.

While wandering around this massive archaeological site in Mexico, I kept wondering what hidden treasures lay undiscovered beneath my feet.

In this travel guide, you’ll learn tips for visiting Chichen Itza, along with some interesting history about the most popular Mayan ruins in Mexico. 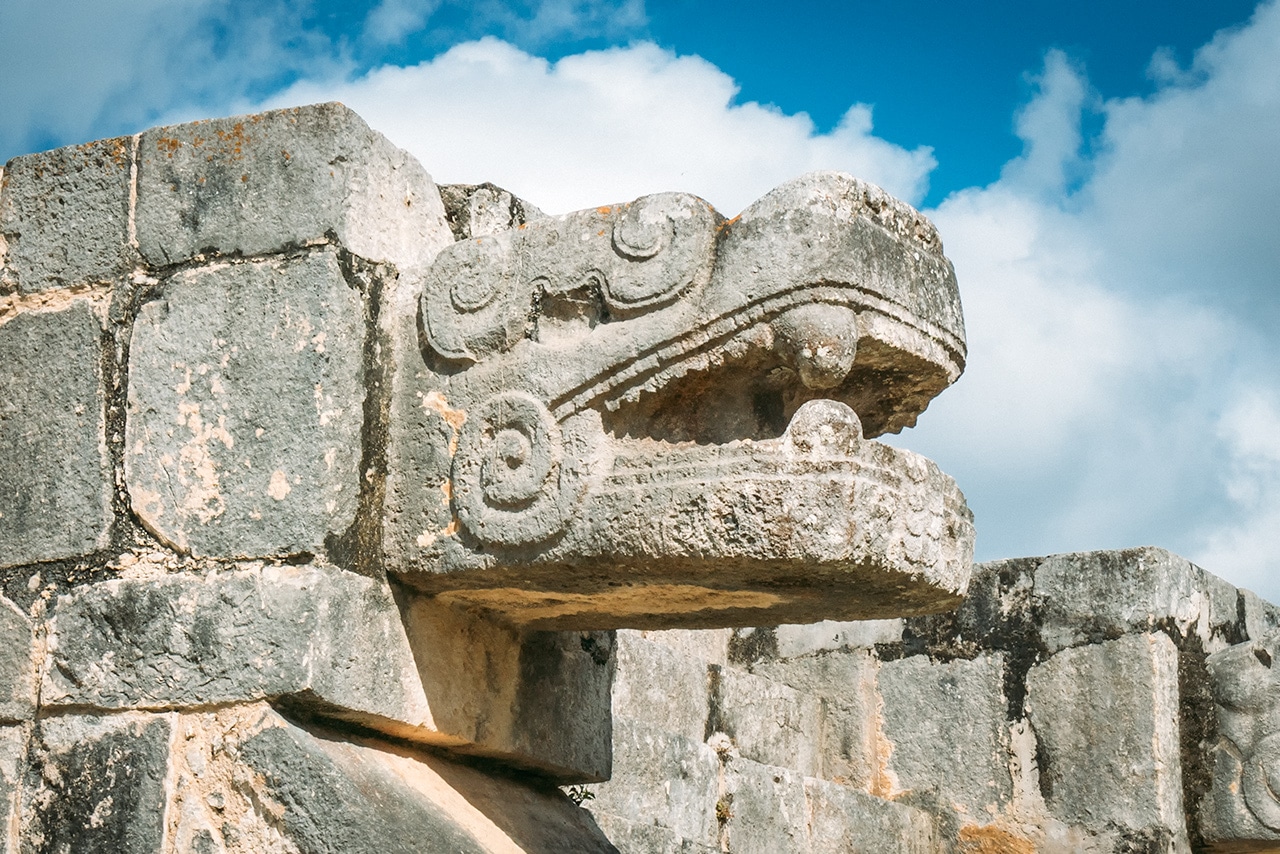 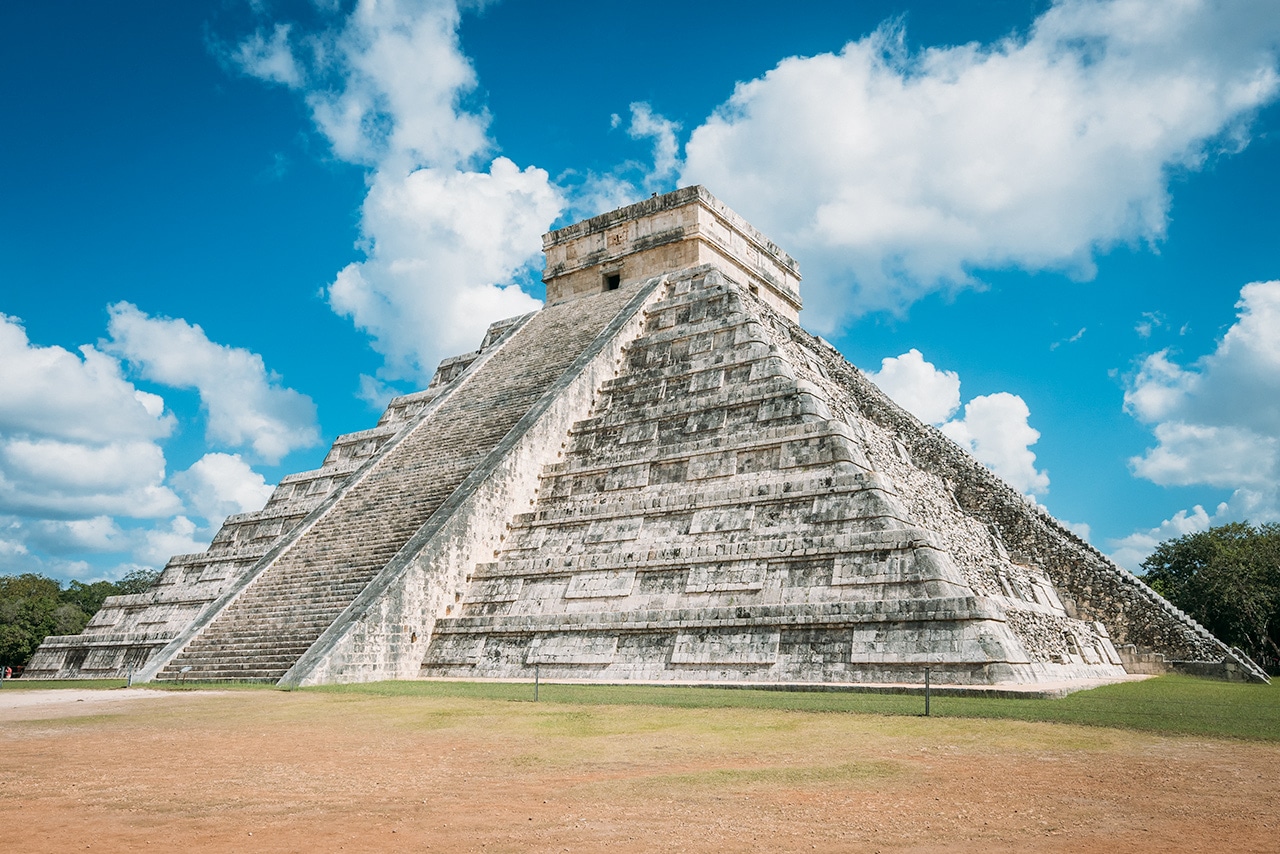 One thing that makes the Chichen Itza so intriguing, other than the giant stone pyramid, is the mysterious decline of the Maya people themselves.

By the time of the Spanish conquest of the Maya, this great city and others like it were virtually ghost towns.

Historians have several theories as to why. Overpopulation may have depleted environmental resources. A great drought or another catastrophe may have wiped out the civilization.

Competing city-states were constantly at war too — the Maya may have simply done themselves in.

In any case, Mexico’s most famous ruins are astonishingly well-restored site compared to other Mayan ruins in the region. Which is why it’s considered one of the New 7 Wonders Of The World. 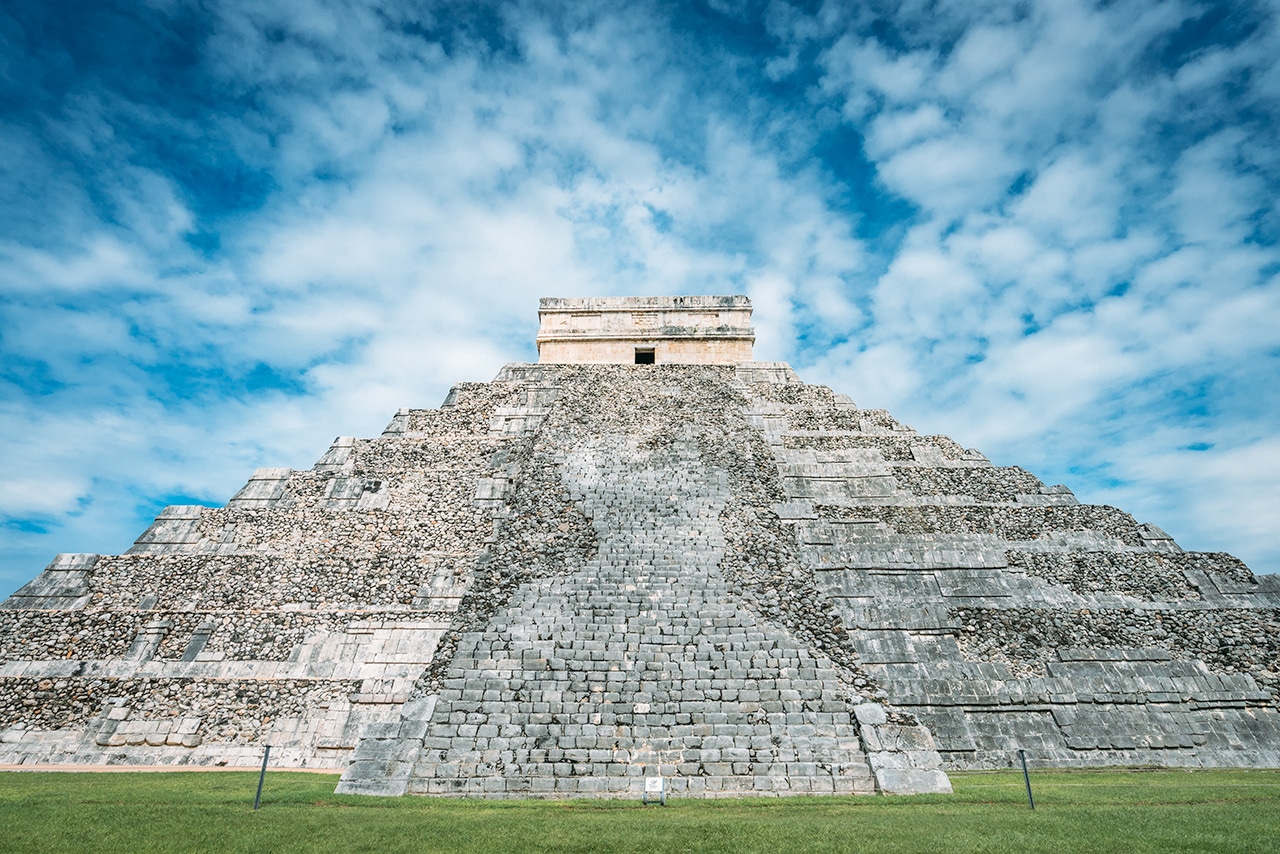 Once you enter Chichen Itza, you can’t miss the 98-foot tall pyramid (aka “El Castillo”) which dominates the northern part of the city. Not as large as the pyramids of Giza, but impressive nonetheless!

Kukulkan is a feathered snake deity in the Mayan religion. The pyramid is guarded by enormous carved serpent heads at the base of the stairs.

The Mesoamerican fascination with stars and planets mean the pyramid’s four stairways represent the four points of a compass. There are 365 steps too, one for each day in the solar calendar.

If you REALLY want a treat, visit El Castillo in March or September during the annual equinoxes. At sunset, a play of light and shadow creates the eerie effect of a snake gradually slithering down the staircase…

Scientists recently discovered this pyramid actually has two more pyramids inside it. 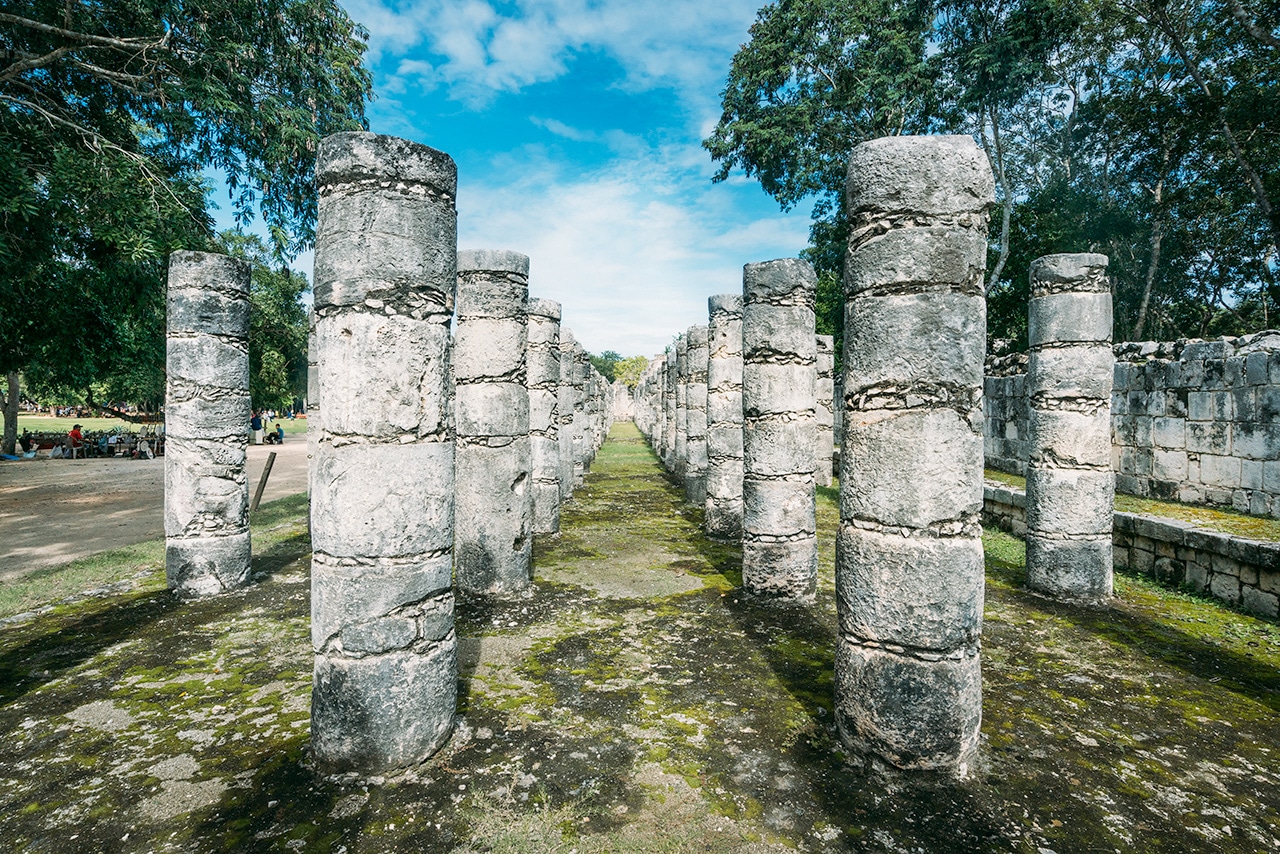 Hall Of A Thousand Columns 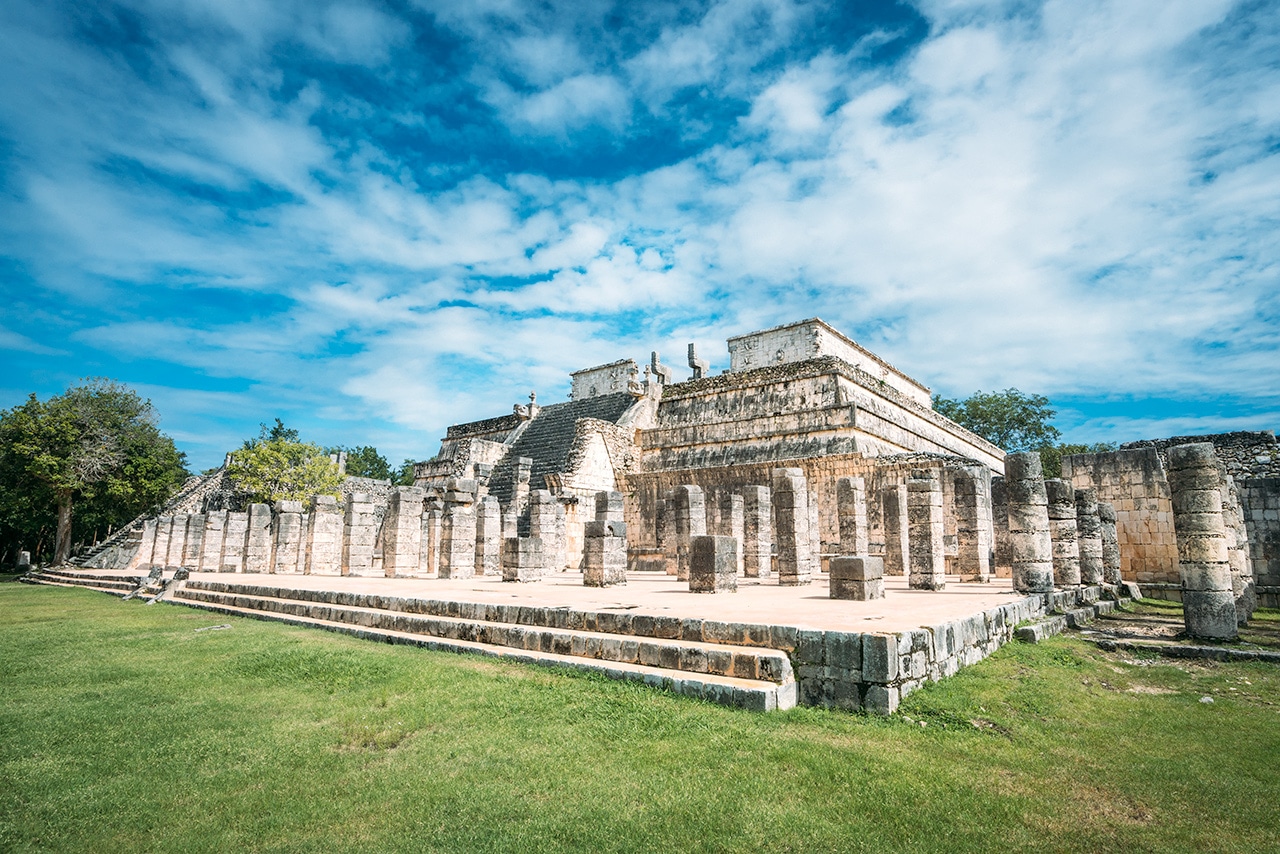 Temple Of The Warriors

Temple Of The Warriors

The is another impressive structure at Chichen Itza. Some of the 200 columns on the south side depict warriors in bas-relief.

The columns once supported a roof system that is long gone.

Also known as the Hall of the Thousand Columns, this grand space might have been a meeting place or an indoor market.

A Chac Mool tops the broad staircase, distinctive statues found throughout the Yucatan Peninsula. Reclining figures holding bowls with their heads turned at a 90-degree angle and propped on their elbows.

They might represent temple guardians or slain warriors bearing gifts to Chac, the god of rain. 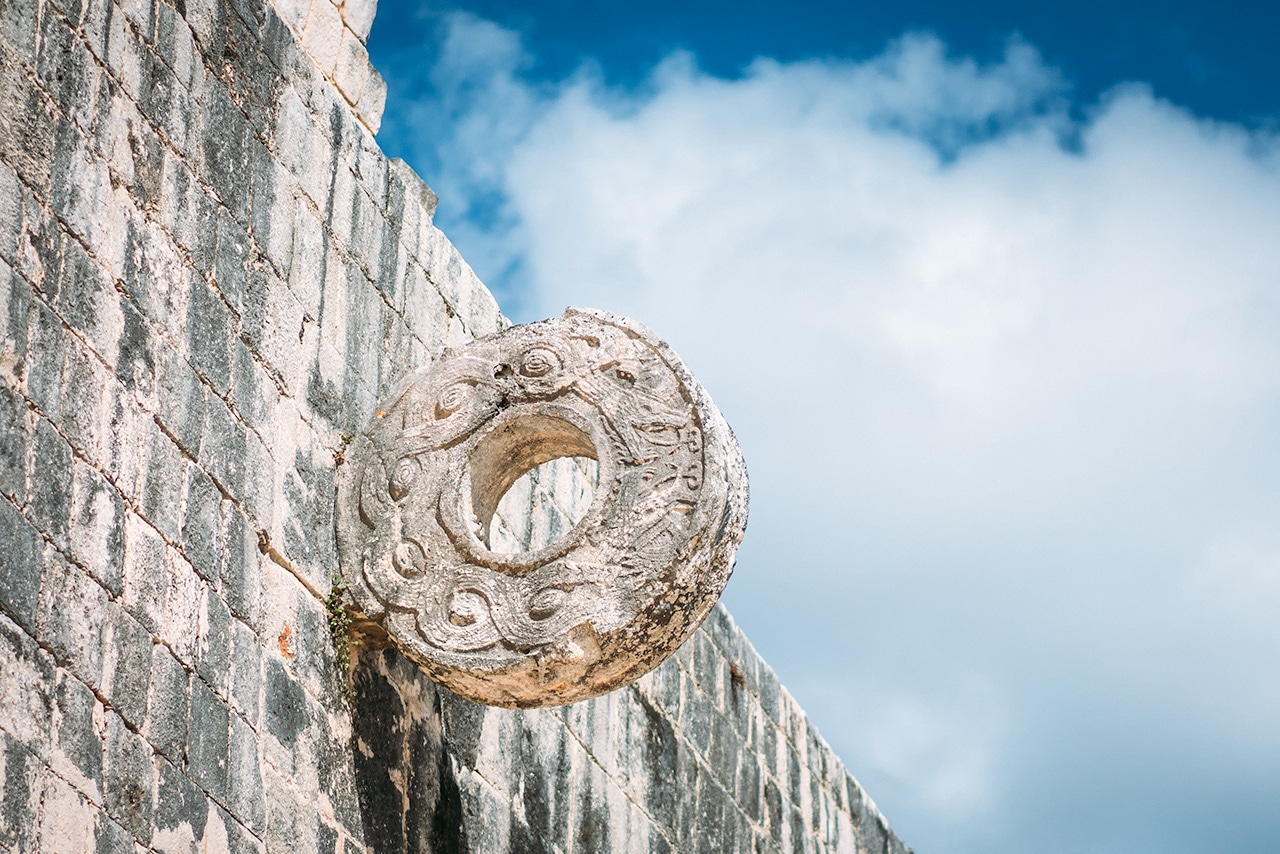 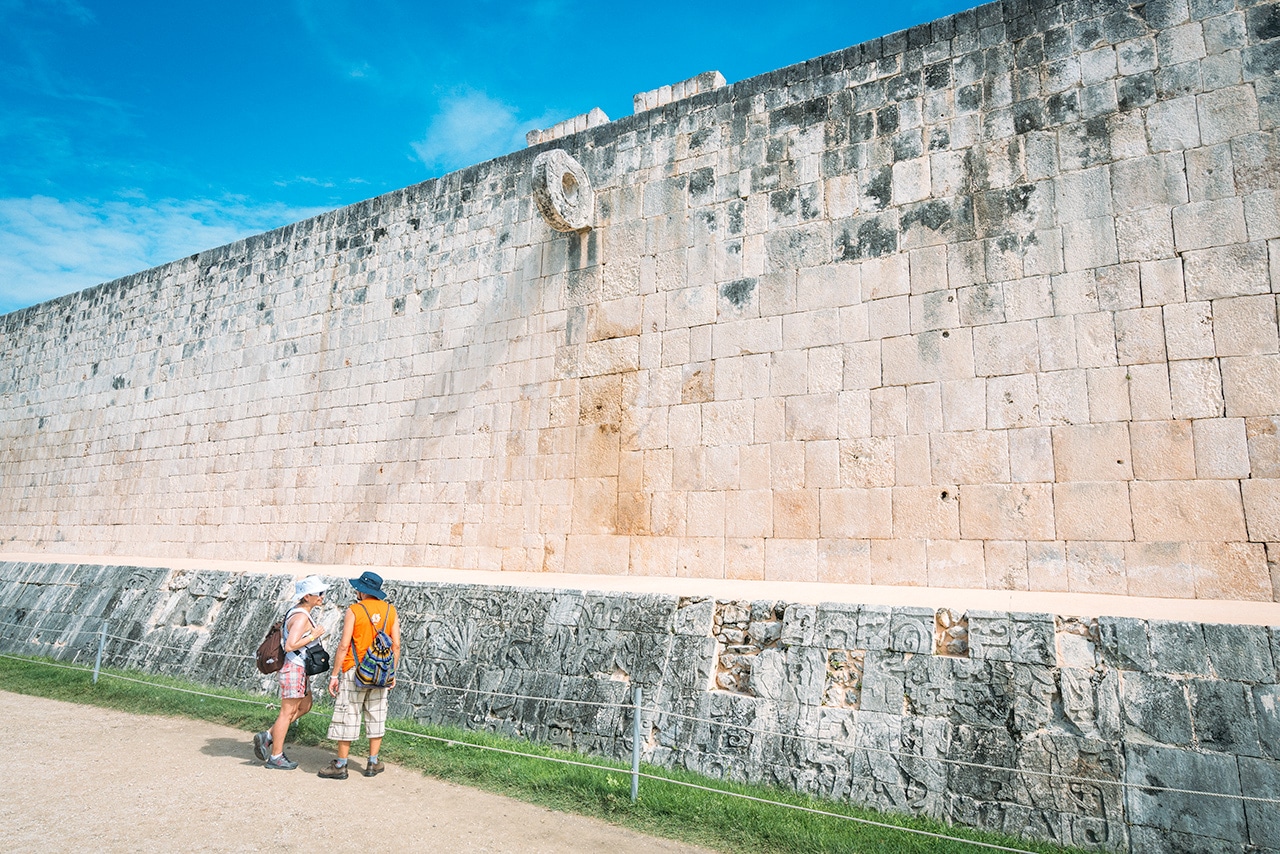 Score Up There Without Using Hands?!

Off to the left of the main pyramid, you’ll find the famed Maya ball court. While many sites include ball courts, the one at Chichen Itza is the largest in the world.

Maya athletes played a game where the object was to put a rubber ball (representing the sun) into a small stone circle perched very high on a wall, without using your hands OR feet.

Some carvings suggest that the winning team’s captain was decapitated, which was a sign of honor. The ball game is over 3,500 years old, making it the first organized game in the history of sports.

Some of the games were played to resolve arguments between rival cities or as an alternative to all-out war. 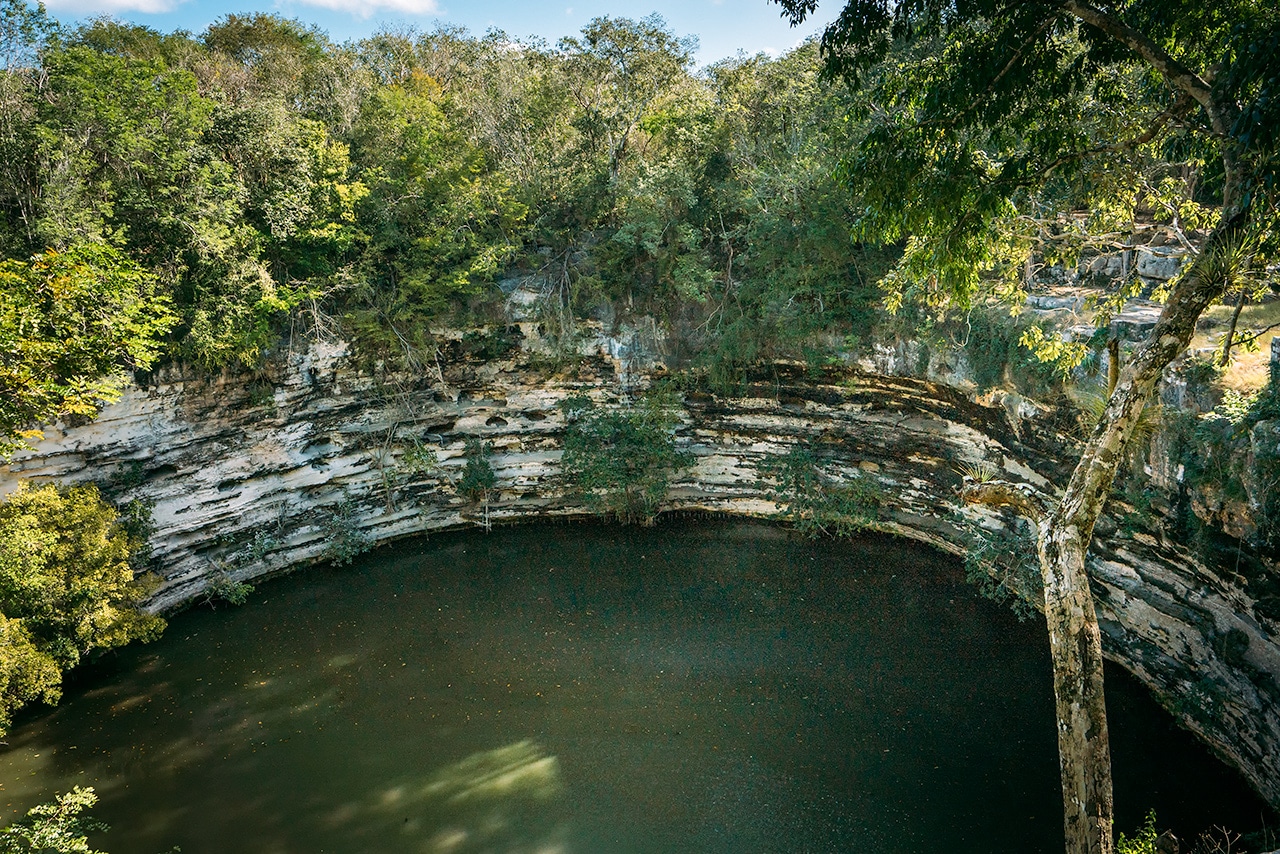 Chichen Itza means “mouth of the well of Itza” in the local Maya language. One possible translation of is “enchanted water.” The Yucatan is covered in cenotes — distinctive limestone sinkholes that form natural pools.

Cenotes have deep spiritual significance for the Maya. Many scholars believe Chichen Itza was built solely because of the large cenote located here, which provided people with fresh water.

(also known as the Sacred Cenote) measures about 200 feet across with sheer cliffs that drop to the water’s surface. During severe droughts, worshippers tried to appease their rain god Chac by sacrificing special items or people (!) they weren’t very fond of.

Dredging this cenote uncovered thousands of artifacts made of gold, jade and copper. Numerous human skeletons with sacrificial wounds littered the depths as well… 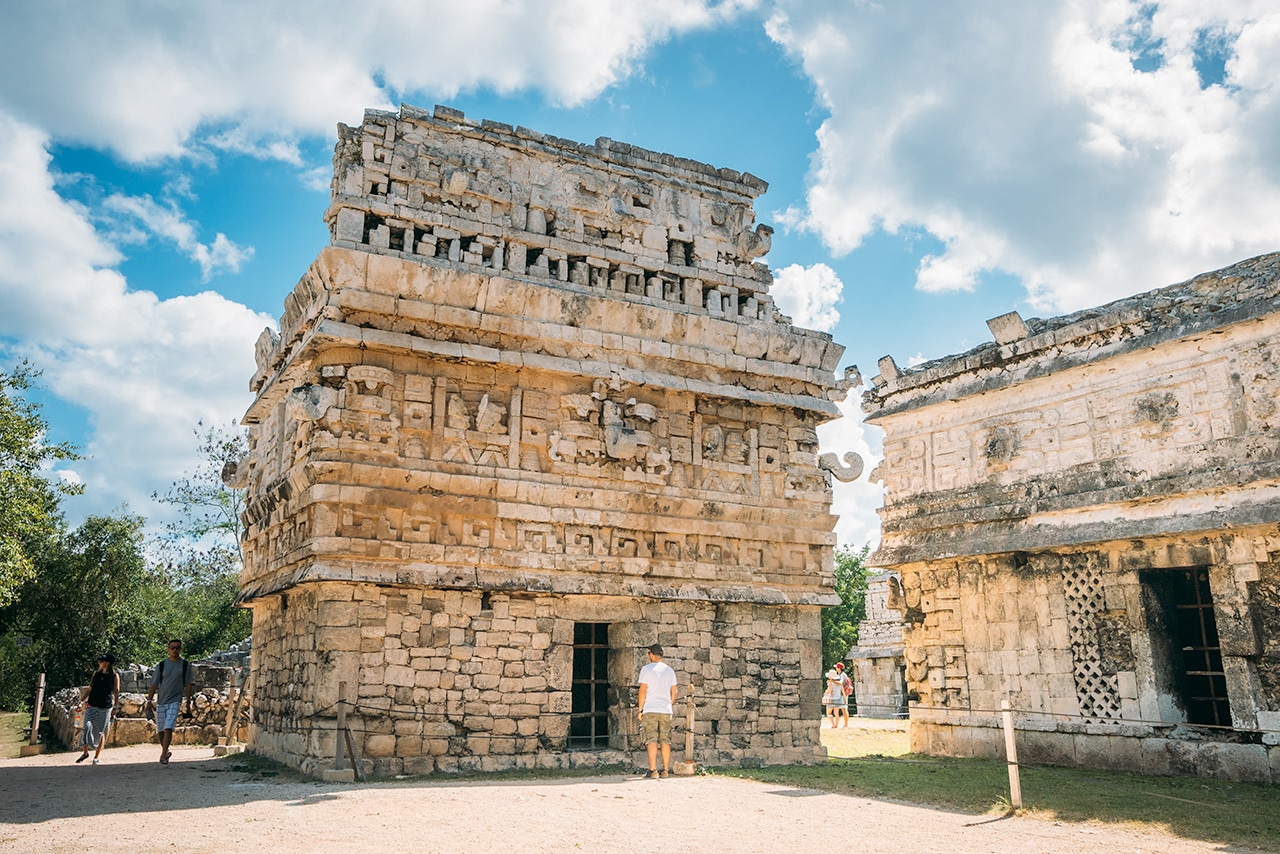 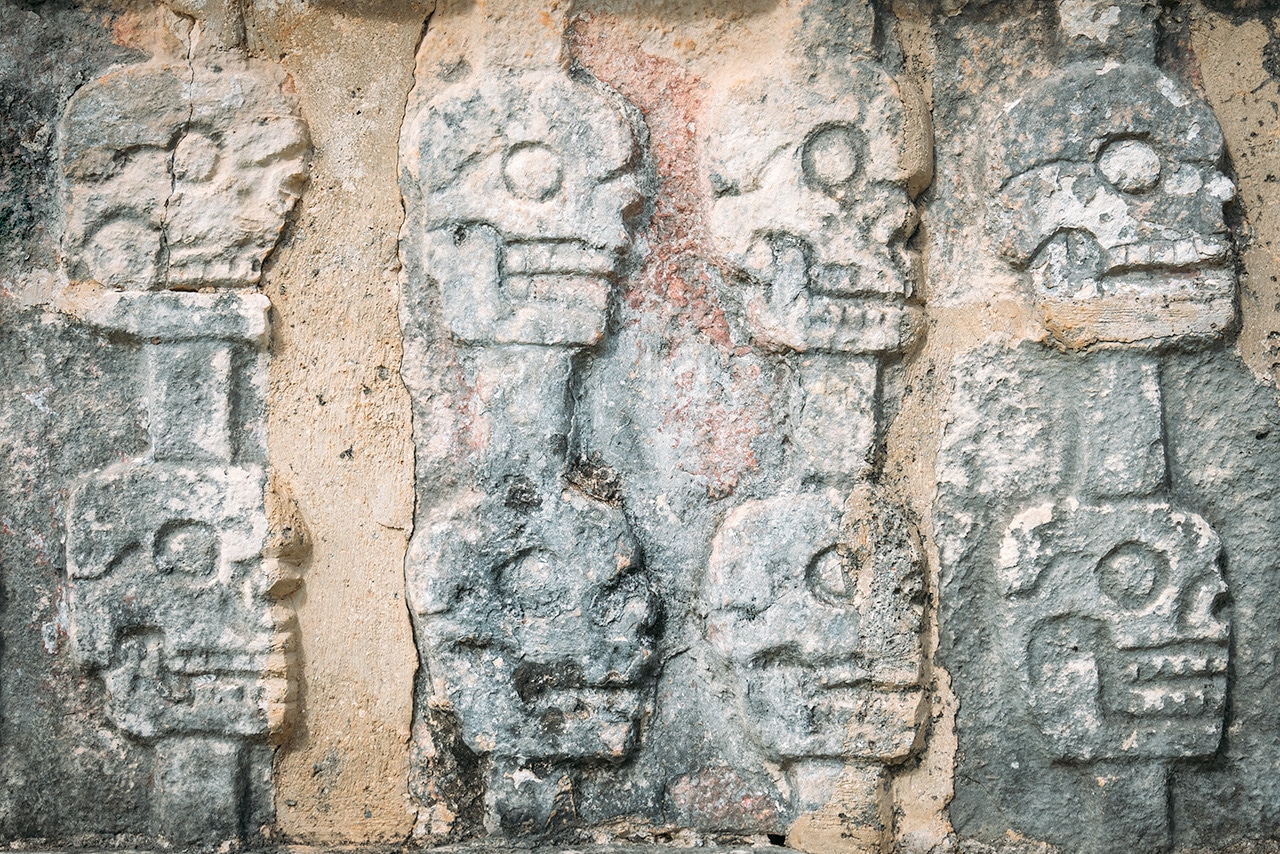 The Wall of Skulls

means “wall of skulls,” and this next attraction lives up to its name. The large platform supported stakes on which decapitated human heads were impaled on top of each other.

The unfortunate victims were enemies defeated in battle or prisoners of war sacrificed to the gods. Whimsical skull carvings around the base are a nice touch.

This exhibit would have scared the living daylights out of would-be enemies.

One of the most interesting structures is , which functioned as an observatory. There are many more fascinating stops at Chichen Itza, so plan to spend at least 3 – 4 hours to see it all. 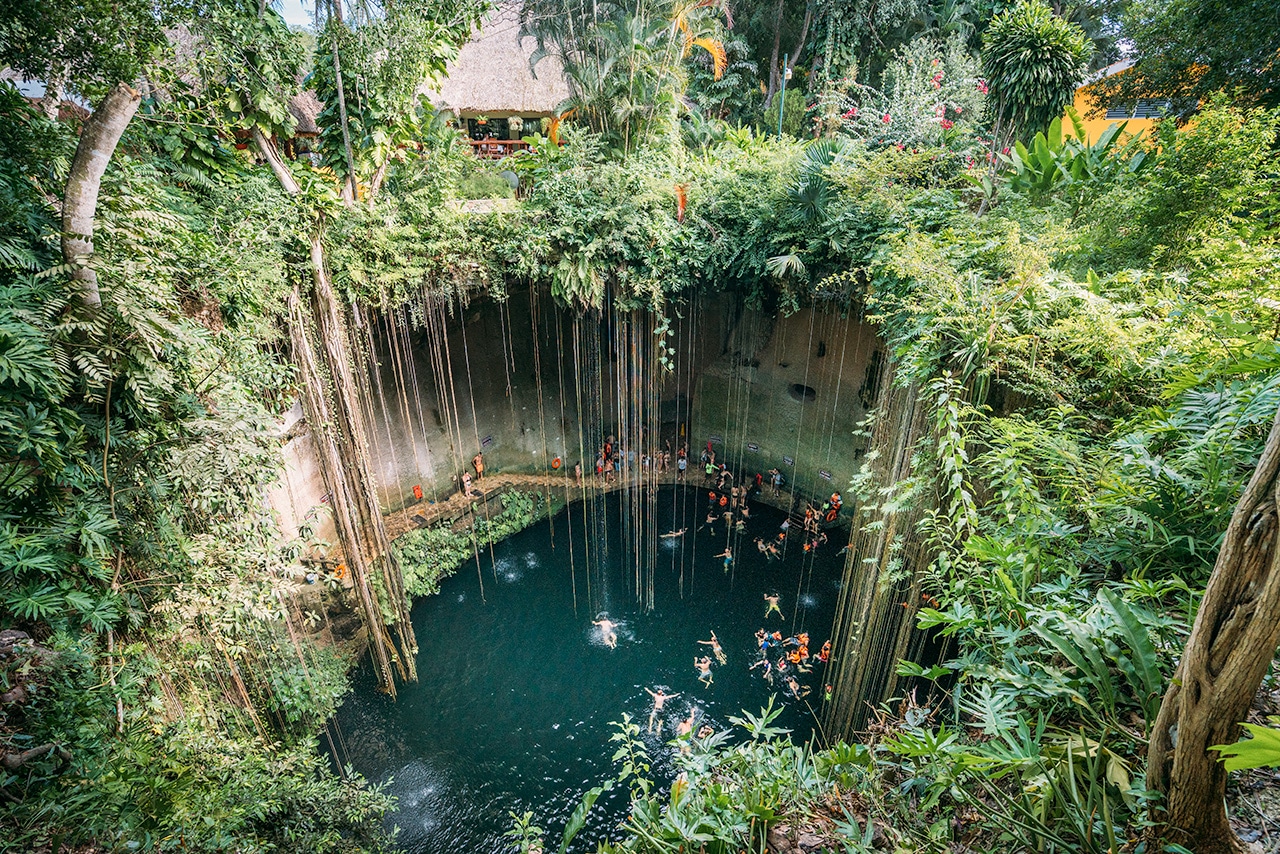 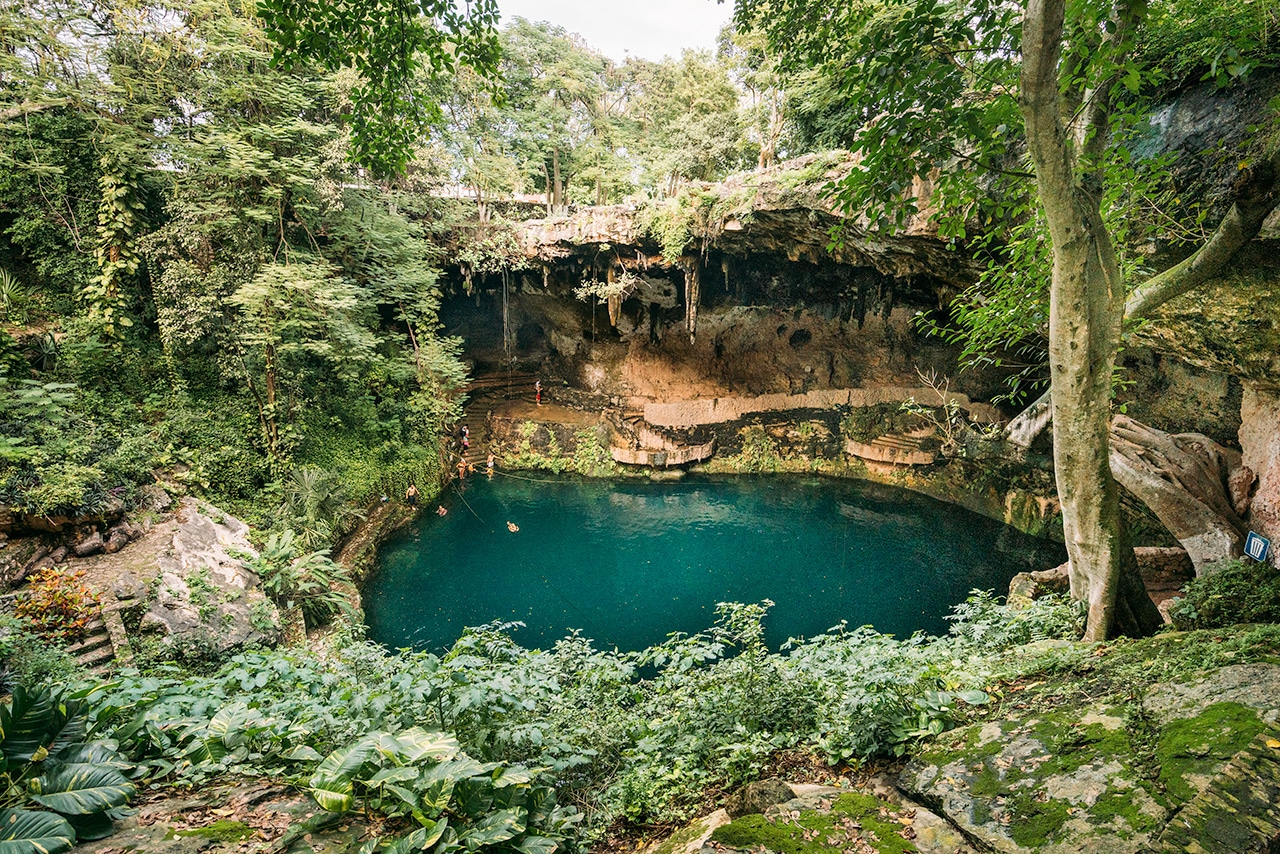 Swimming In Cenotes Nearby

While you can’t swim in the cenote at Chichen Itza itself (unless you want to join the skeletons at the bottom!) there are others nearby where you can.

The closest cenote, and most popular with tour buses, is called . While it’s a pretty one, it’s always packed with people and feels like a tourist trap. I’d probably skip it.

If you want a more authentic cenote experience, I’d recommend cooling off in the cenotes near the town of Valladolid. These include , , or . 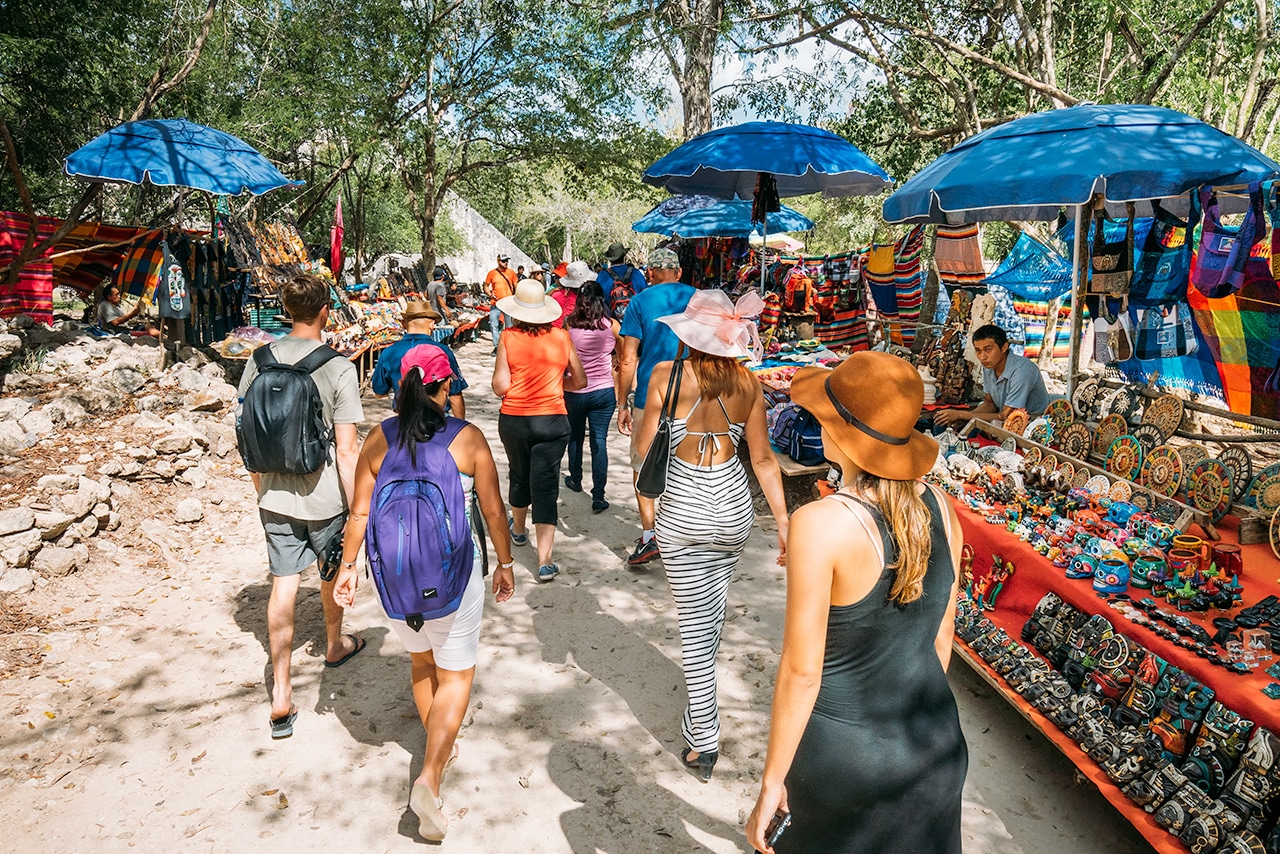 How To Get To Chichen Itza

The best site to book your car is Discover Cars. They search both local and international car rental companies to help you find the best possible price. This is the easiest way to rent a car in Mexico.

If you’re looking for a more adventurous route from Cancun, the “libre” road runs parallel to the main toll highway and goes through a bunch of smaller villages for a more authentic feel of Mexico.

Mexican ADO Bus Service from Cancun to Chichen Itza costs about $202 MXN ($9) one way and takes 3 hours. From Valladolid, there’s bus service every 30 minutes for about $26 MXN.

Colectivos (shared taxis) leave the town of Valladolid from a lot just east of the bus station and cost about $35 MXN ($2 USD).

If you’re the type of person who prefers joining a tour, there are guided tours of the Chichen Itza Ruins, some of which begin from Cancun and include transportation. 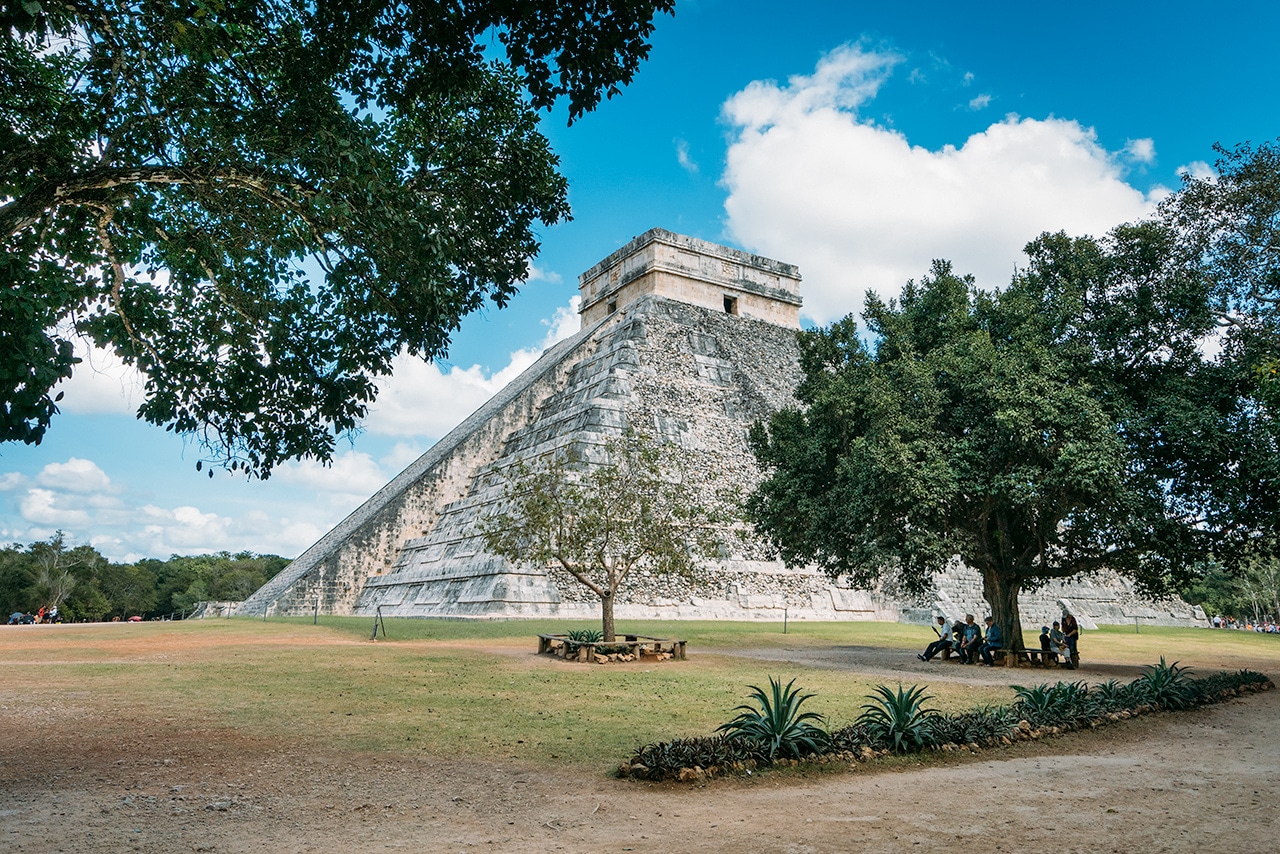 Different View of the Pyramid

A group of scientists from the National Autonomous University of Mexico (UNAM) has been researching the existence of a second structure located the Kukulkan pyramid. They found the pyramid-within-a-pyramid using three-dimensional electrical tomography.

It’s believed the current structure was built on top of the other one. Both sit on top of an underground cenote cave filled with water. Archaeologists continue studying the site, and you may be able to see some of their excavations as we did behind the main pyramid. 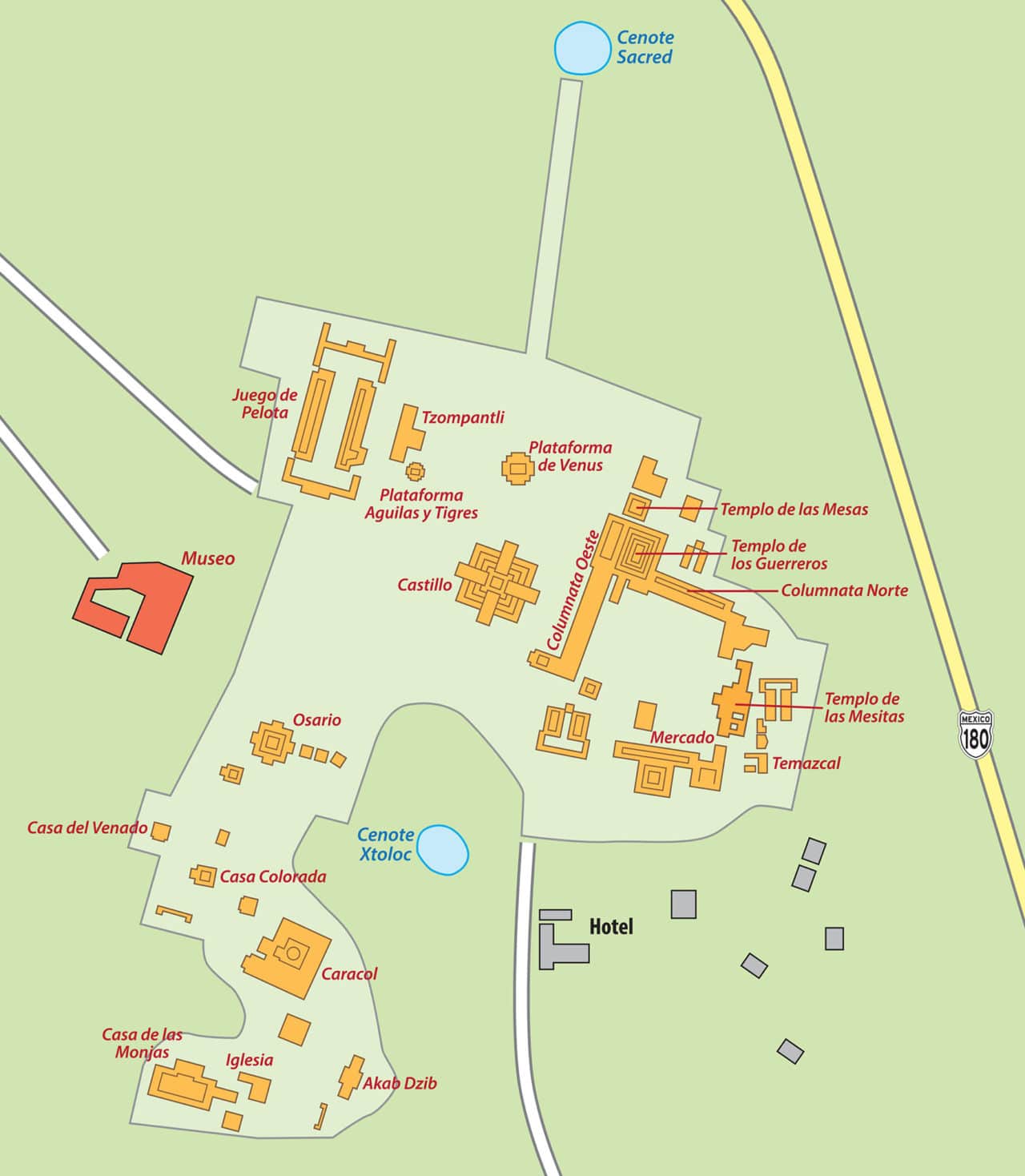 Getting Around the Ruins